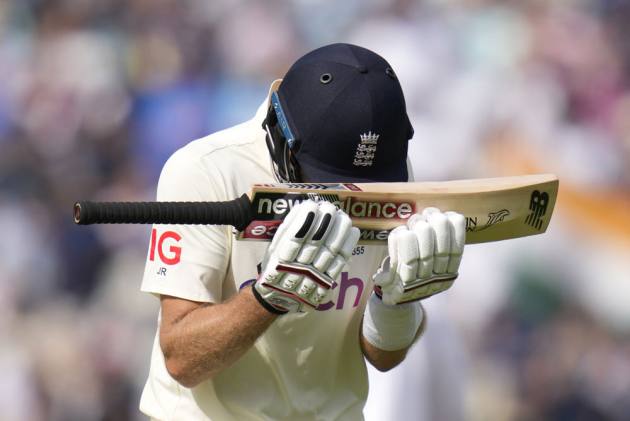 English skipper Joe Root on Monday rued that they could not take a big first innings lead after dismissing India for a paltry 191 and also dropped a few tough catches, that cost them the fourth Test.

However, the home captain vowed to make a strong comeback at the Old Trafford in the final Test, starting September 10.

England secured a 99-run lead after exploiting the conditions on day two but India came up with a huge second innings effort to set the hosts a stiff 368-run target and won the contest by a comprehensive 157-run margin.

"We should have got a bigger lead the first time round with the bat. It would have been nice to have another 100 runs actually, and then we're looking at a very different, very different game," Root said in the post-match media interaction.

"It's been frustrating today to lose 10 wickets. But actually where the game is lost, where we could have really stamped authority on things was earlier in the game."

Root also rued some dropped catches including that of second-innings centurion Rohit Sharma at slip by Rory Burns that proved to be decisive in the end.

"We got to be a little bit more ruthless there, the first innings runs really cost us, as well as catching. We did put down a few chances, some of them were extremely difficult.

"And that has to be said but at the same time you give chances and half chances to world class players. They take them, and we've seen that throughout this game."

It was all downhill for England after Haseeb Hameed got out for 63 as they lost four wickets for six runs with Jasprit Bumrah making the ball talk with his unplayable reverse-swing.

"It's disappointing and frustrating, especially with the opportunity to go with a Test match to be bowled out is hard to take.

"But also you've got to look at how we responded from the Lord's and the performance we put in at Headingley," he said referring to their series-levelling win in the previous Test.

"We've got a look to do exactly the same when we go to the Old Trafford. We are very confident as we've just recently shown we can we're more than capable of turning things around very quickly.

"We're going to make sure that we get ourselves in a frame of mind over the next couple of days to do just that. There is every confidence that we can go to Old Trafford and get a win."

The skipper had to deal with some of the injury blows including to their pace duo of Jofra Archer and Stuart Broad, while their talismanic all-rounder Ben Stokes has taken an "indefinite break" from cricket.

In such a scenario, much of their workload has been on their veteran pacer James Anderson.

Asked if he would look at rotation, he said: "We'll have to look at things, we'll see how everyone pulls up the next couple of days and we'll be trying to make smart decisions around that."

"It's been frustrating in terms of having abundant resources to contend with a lot of injuries. So now I have to try and manage that, as well as we can and make sure that we've got an attack that can take 20 wickets. It's a delicate balancing act, one that we will try and make sure we get right," he said.