John Stones ended his goal drought as Manchester City secured a 2-0 derby win over Manchester United to set up an EFL Cup final showdown with Tottenham. 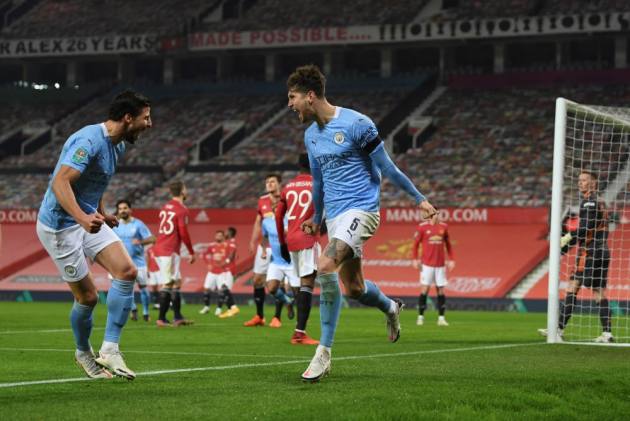 Stones has been outstanding at the heart of the City defence since forcing his way back into the side this season and he scored his first City goal in 1,162 days at Old Trafford on Wednesday.

The in-form centre-back had earlier put the ball in his own net early on but Marcus Rashford was offside, summing up how his fortunes have changed.

United were unable to respond following Stones' goal early in the second half and Fernandinho doubled City's lead seven minutes from time with an excellent finish.

Pep Guardiola's side were worthy winners, dumping their neighbours out at the same stage they did 12 months ago as they aim to win the competition for a fourth consecutive season.

Four in a row is still #EFL | #CarabaoCup | @ManCity pic.twitter.com/zgMogcoNCz

Stones was relieved to see the flag raised after the ball bounced off him and into his own net before Ilkay Gundogan had a goal ruled out for offside at the other end in a pulsating start after a poignant minute's silence for City legend Colin Bell, who died on Tuesday at the age of 74.

Zack Steffen denied Bruno Fernandes with a magnificent one-handed save at full stretch and Kevin De Bruyne rattled the point with a rasping drive from 20 yards out.

City were dictating the tempo and Phil Foden was also denied an opening goal after straying just offside in an entertaining, but goalless first half.

It took less than five minutes of the second half for the opening goal to arrive, though, Stones finding the back of the net for a second time on the night when he turned Foden's inviting free-kick in with his left thigh.

Dean Henderson tipped Raheem Sterling's header around the post and produced a fine save to keep out Riyad Mahrez's venomous strike as City scented a second goal.

United could not find a way through a well-drilled City defence and Fernandinho settled it, firing home with his right foot from outside the penalty area following a corner from the right.

What does it mean? Ominous City pay fitting tribute to Bell

City made a big statement in the battle for the Premier League title when they outclassed Chelsea last weekend and they are now unbeaten in 12 matches.

Guardiola's men have won five in a row and this was their first victory over United in four attempts as they paid a fitting tribute to their late midfield great Bell.

City have dominated the EFL Cup and will be favourites to lift the trophy for a sixth time in eight seasons when they face Spurs in the final at Wembley on April 25.

After falling out of favour at the Etihad Stadium, Stones has been brilliant alongside the hugely impressive record signing Ruben Dias.

Brimming with confidence, Stones was typically calm on the ball and read the game superbly as United fired a blank for the first time since they were held to a goalless draw by City on the same ground on December 12.

As well as scoring his first City goal since November 2017, Stones gained possession six times, won 80 per cent of his duels and had a passing accuracy of 95.3 per cent. The uncompromising Dias made six clearances, two blocks and won all of his five duels.

United have now lost four semi-finals in a row and they could have no complaints.

It was not a night to remember for Fernandes, who had a passing accuracy of only 59.4 per cent in the City half and twice blazed off target when he had a sight of goal.

- City are only the second side to reach four consecutive finals in the competition after Liverpool, who did so between 1981 and 1984.
- This will be their ninth final – only Liverpool (12) have played in more.
- United have been eliminated from three of their last four semi-final ties in the tournament, having progressed from eight of nine before that.
- The home team has won just three of the last 15 derbies between United and City in all competitions (D3 L9).
- City have now had 16 different goalscorers in all competitions this season, more than any other Premier League team.

Guardiola's side are at home to Birmingham City in the third round of the FA Cup on Sunday, while United also face Championship opposition in the form of Watford a day earlier.