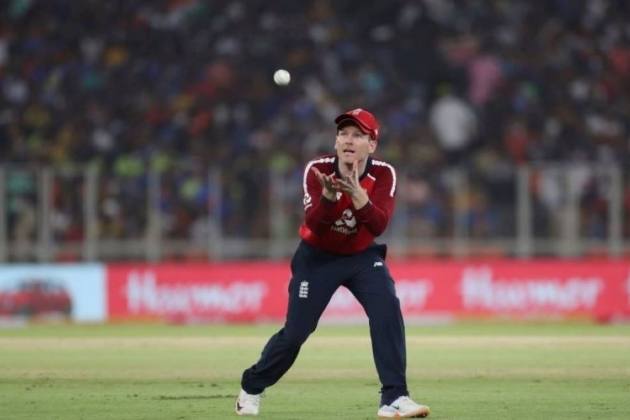 Skipper Eoin Morgan is one of the white ball "pioneers", who has propelled English cricket to a different level with his incredible leadership, reckons his deputy Jos Buttler.

Morgan, who had ended his country's 44-year wait for maiden ODI World Cup title in 2019, on Tuesday became the first England player and fourth overall to make 100 appearances in T20 cricket.

He celebrated the milestone moment with an eight-wicket win over India in the third T20.

"He has been a pioneer for English white ball cricketers. He's always been someone who's been ahead of the curve," Buttler told reporters after England snatched a 2-1 lead in the five-match series here on Tuesday.

Continuing his praise for his skipper, Buttler said Morgan along with Kevin Pietersen have taken their white ball cricket to a different level.

"They were two guys I always looked up to in white ball teams and who could do a bit different, who could take the game forward and look to be ahead of the curve.

"He's been a pioneer, as a player to start with. And certainly as a captain and a leader. He's taken English white ball cricket to a place, it's never been before, to be honest. He's done that in quite an incredible way.

"Everyone enjoys playing for him. The environment that he's created, the group we have at the moment is as much fun to play in as ever. As a really good team, he's been a huge driver of that alongside a few others.

"He is a selfless guy. Today is really about him and no mean feat to achieve 100 caps," he added.

Buttler, who was earlier seen in a finisher's role, further said he's got full backing from Morgan to play as an opener in T20Is after his skipper promoted him in 2018.

"Now I've got the full backing from Morgs (Eoin Morgan) to go and do that and that gives me a lot of confidence. And I think, really enjoyed the role today as I always do," Buttler, who scored a match-winning unbeaten 83, said.

"Yeah, it's (opening) my preference in T20 cricket. But I'll always be open-minded, I'm sure certain teams may ask me to bat somewhere else but I know Morgs is keen for me to open in this team and do that with his backing."

Asked whether the knock has ended the debate over who to open, he said: "I think people seem to quite enjoy talking about it. And yeah, I certainly sometimes feel the pressure of that."

"Every time I do, I have the opportunity to try and make a case because you know there's obviously loads of us who can open the batting for this team."

"Eoin is always clear with every single player on what he expects of them, and how much he backs people to do that job. At the moment he wants me to open and backs me 100 per cent. So that gives me a lot of confidence. You're not out till the end and to see a side home is a fantastic feeling."

The Rajasthan Royals cricketer has struggled to score freely against Yuzvendra Chahal in IPL and in the first T20I the leg-spinner trapped him lbw but it was different in the third match.

Defending a modest 157, skipper Virat Kohli pressed in Chahal early in the fourth over but only to see Buttler go in a counter-attacking mode in his 52-ball unbeaten knock with four sixes and five boundaries.

"I felt it was a great opportunity to try and attack him. The ball had swung a little bit for the seamers and was standing up so I felt like spin was going to be the best time to attack in the Powerplay," he explained.

The penultimate T20I between the two teams will be on Thursday.