Jose Mourinho Wins Premier League Manager Of The Month – 'It's Not About Me, It's About The Team' 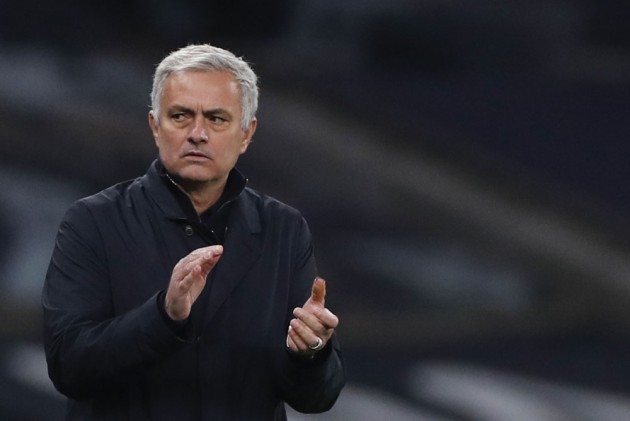 Jose Mourinho insists his Premier League Manager of the Month award is a team prize, not an individual one. (More Football News)

Mourinho took the honour for November after Tottenham won three of their four league games, only dropping points in a 0-0 draw with Chelsea at Stamford Bridge.

Spurs returned to winning ways by beating Arsenal in the north London derby and sit top of the Premier League, having gone 10 games unbeaten since an opening-day defeat to Everton.

Despite his success in England – Mourinho has guided Chelsea to the title on three occasions, while he has also won the FA Cup once and EFL Cup four times – it is only the fourth time he has claimed the league's Manager of the Month award.

He last did so in March 2007 during his first stint at Chelsea, but the 57-year-old said it should not be seen as an individual achievement.

"If it was about me it would have to be the coaching staff of the month, because without the other guys this wouldn't be possible, so this kind of thing I never feel it as an individual award. I always feel that belongs to the team, belongs to the results that we had.

"If we don't have three victories and one draw at Stamford Bridge, for sure we wouldn't have any chance to win it, so it's about the team."

Key to Spurs' fantastic run has been the supreme form of Harry Kane and Son Heung-min, who have combined for 11 Premier League goals this season, with only Alan Shearer and Chris Sutton (13 in 1994-95) and Ryan Fraser and Callum Wilson (12 in 2018-19) linking up for more in a single campaign.

The pair joined forces again to clinical effect in the 2-0 win over Arsenal – Son curling in a sublime opener before teeing up Kane to lash home a second.

Asked how Kane and Son stacked up against some of the other star names he has coached, Mourinho replied: "I don't like to compare players and some weeks ago I saw, in some media, that I chose my all-time team.

"I also would never say this is my favourite goalkeeper, centre-back or striker, I never do that. I don't compare players, I am just grateful for players that give everything for me.

"Sonny and Harry, without comparing to other players, they are world class. I am not saying anything different than that."

Spurs netted five goals through the month of November, conceding just one at the other end across their four league outings.

Mourinho's team created 25 opportunities, with eight of those categorised by Opta as big chances. At 62.5 per cent, their big chance conversion rate ranks second in the top flight, behind Southampton (66.7), though the Saints only crafted three compared to Spurs' tally of eight.

Tottenham scored one penalty in November, with two goals coming via headers – including Kane's last-gasp winner in a 1-0 victory at West Brom.

Though their defence gave little away, Tottenham did face 53 attempts on their goal through the 30-day spell, an average of 13.25 per game. This was also 16 more efforts than Spurs themselves managed but, as proved in the November win over Manchester City, Spurs are set up perfectly to counter-attack.

Kane was Spurs' leading scorer, netting twice in four appearances, while he created a further seven chances for team-mates, including one assist.

The rest of Tottenham's goals were shared between Son, Giovani Lo Celso and Gareth Bale, who netted late on against Brighton and Hove Albion.

With eight top-flight goals to his name this season, Kane has now scored 20 times and added 11 assists in 29 Premier League appearances under Mourinho at Tottenham, averaging a goal or assist every 83 minutes.

Since 2004-05, among the 175 players to play at least five league games under Mourinho, the only two with a better average goal-assist ratio are Cristiano Ronaldo (59 minutes) and Gonzalo Higuain (72 minutes).

27 - Harry Kane has been directly involved in 27 goals in 18 appearances for Tottenham this season (14 goals, 13 assists), more than he recorded in 34 games last season (26). Bonkers. pic.twitter.com/M8urjoTF35