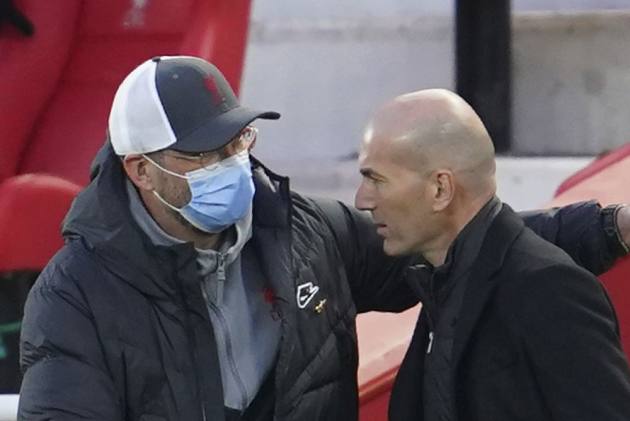 Jurgen Klopp remains confident Liverpool can qualify for next season's Champions League, though he acknowledges the stuttering Premier League holders have a fight on their hands to crack the top four. (More Football News)

Liverpool failed to take their chances in Wednesday's second-leg goalless draw as the Reds crashed out 3-1 on aggregate at the hands of Real Madrid.

Klopp's Liverpool attempted 13 shots from inside the penalty area but could not find a way to score against visiting LaLiga champions Madrid on Merseyside midweek – the club's most without scoring since March 2006 against Benfica.

With Liverpool's Champions League and Premier League hopes over, the Reds will turn their attention to breaking into the top four –  Klopp's men are sixth in the table and three points adrift of West Ham heading into the final seven rounds.

A draw on the night and we exit the @ChampionsLeague. #LIVRMA | #UCL

"That has nothing to do with confidence, I would say I am naturally confident, but that doesn't mean we will end up there," manager Klopp told reporters when asked if the performance against Madrid gave him confidence in Liverpool's bid to qualify for the Champions League.

"We just can read the table, we know the points, we know the situation and stuff like this. We know who we play and we don't have to talk too much about it. I said now what we think about it and, yes, we want and we have to – and if we want that we should play really good football, what we did tonight. But if we want to go through then we should finish those situations off on top of that because that is very helpful as well.

"I think we are not in a bad moment at the moment; we played pretty well even when it was a late winner against Aston Villa. We played a good game against them, we played really good against Arsenal and not too good against Real Madrid in the first leg, but in the other games we were not bad.

Liverpool are winless in their last five games against Madrid in the Champions League (D1 L4), while they have failed to score in both games against the Spanish powerhouse in this run at Anfield.

Meanwhile, Liverpool have only won one of their last 11 games against Spanish opponents in the Champions League (D3 L7), failing to win any of their last four across the last two seasons.

Klopp – who was asked if Liverpool's elimination would serve as motivation – added: "That will not happen that it impacts us negatively. We are not silly. We want what we earn. If we don't earn it 100 per cent, then we respect the situation that we don't get it.

"How I said, tonight if we scored an early goal this game would've been a different one – I think everybody knows that but it's hypothetical, we didn't. But it has now no impact on the Premier League, apart from that we don't play midweeks at least internationally – I'm pretty sure Premier League plays midweeks if I'm right. So we can concentrate and focus on the Premier League – what we will and what we have to.

"But it's tough just because we are still not in the hot seat, I would say, and we face Leeds on Monday, so that's a tough one. What can I say? They are the leader in all physical stats in the Premier League pretty much, so you better run a lot yourself. We have a few days until then, we will use that and then we make sure we are ready for that."