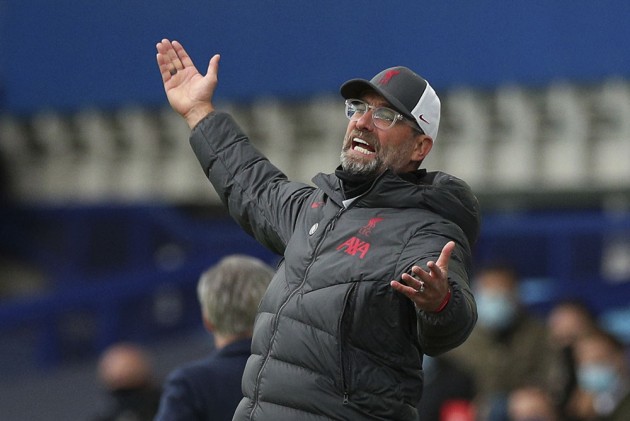 Jurgen Klopp fears Manchester City "could run away" with the Premier League as Liverpool desperately fight to keep hold of their title. (More Football News)

City beat Sheffield United 1-0 on Saturday to make it a club-record 12 wins in a row, with eight top-flight victories on the bounce moving Pep Guardiola's side seven points clear of the champions.

The Reds, who ended a five-match winless league slump with an impressive 3-1 win at Tottenham on Thursday, head to in-form West Ham on Sunday needing a victory to keep the pressure on.

It is in stark contrast to last term, when Klopp's charges roared clear to win the league by 18 points. In fact, with only just over the half the season gone, no side can now surpass Liverpool's tally of 99 from last term.

12 - Manchester City have won their last 12 matches in all competitions, the longest winning run in their history. Juggernaut. #MCISHU pic.twitter.com/VnlZb6wBlA

Klopp was asked whether this might be the most exciting title race, with so many clubs in the mix, and if perhaps it could be won with the fewest points, a record belonging to Manchester United after their 1996-97 triumph with 75 on the board.

But the German warned that Guardiola's men are looking nicely poised to claim the trophy back, with his own side's chances hampered by injuries.

"Will it be the most exciting run-in with different teams in and around? Could be, but City could run away now as well. They're in a good position, playing good football again," he said.

"I don't know, I don't know if it will be the lowest amount of points, I don't even know how many points are out there to get.

"What we see is it's a difficult season for all teams, maybe apart from West Ham and Leicester look pretty good as well.

"So a lot of teams look good but we all have our ups and downs during the season.

"It's for a sure a season when you need to be lucky with injuries, to be really on top of things. More so than in other years because of the amount of games in a specific period.

"But I can imagine watching from outside it's really exciting, especially for a neutral fan. I don't know who will be champions at the end of the season."

Liverpool lost the influential Virgil van Dijk to a serious knee injury in the Merseyside derby back in October, while centre-back partner Joe Gomez is likely to miss the rest of the campaign having damaged his patella in November.

Joel Matip's fitness issues reared their head again in the win at Spurs when he damaged his ankle.

The Anfield club have had to utilise defensive midfielder Fabinho almost exclusively in defence this term, with skipper Jordan Henderson also filling in at centre-back.