Joachim Low has declared he will cut short his contract as head coach of Germany, and several big names may be considered as his successor 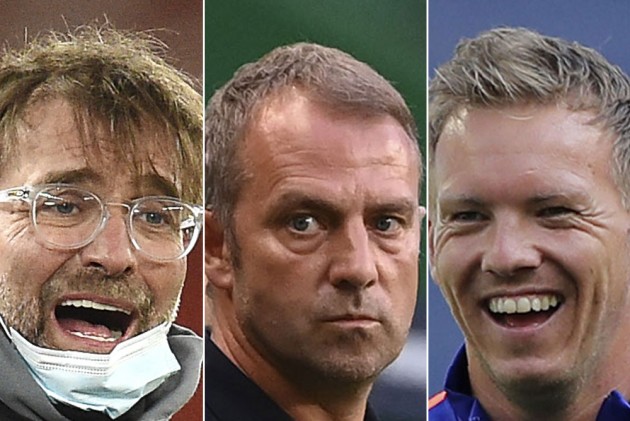 The search is on for a successor to Joachim Low after Germany's long-serving national team boss announced he would step down after Euro 2020. (More Football News)

Low will complete a 15-year tour of duty as head coach when he leads Die Mannschaft into this year's tournament, delayed a year by the COVID-19 crisis.

His contract had been due to run until after Germany's Qatar 2022 World Cup campaign, but 61-year-old Low has decided the time will be right to step aside before then.

That means the Germany Football Association (DFB) must spring into action and find the right coach to take over from Low, a World Cup winner in 2014.

DFB president Fritz Keller said: "The fact that he informed us about his decision at an early stage is very decent. He gives the DFB consequently the necessary time, calm and a sense of proportion to name his successor."

Joachim #Löw will step down as national team head coach after @EURO2020. pic.twitter.com/t4OuyQmaSC

Germany is enjoying a golden era of producing world-class coaches, and here are five the DFB may consider.

Bayern have flourished under Flick's leadership over the past 18 months, having promoted him to the top job when Niko Kovac struggled to get the best from a talented group.

Club CEO Karl-Heinz Rummenigge has noisily shot down the prospect of Flick leaving to become Germany boss, saying the coach will remain at Bayern for next season.

However, Rummenigge himself will step down from his position at Bayern at the turn of the year as Oliver Kahn replaces him, and Flick may see the Germany job as offering greater long-term security.

He served as assistant to Low from 2006 to 2014 so knows the job as well as any contender.

Jurgen Klopp: Could Liverpool adventure be coming to an end?

Liverpool's steep decline in 2021 has led to the first rumblings about Klopp's Anfield future among supporters of the club.

At board level, there has been no indication Liverpool would be happy to lose the man who has led them to Champions League and Premier League title success.

It seems the former Mainz and Borussia Dortmund boss has enough goodwill in the bank to be trusted to turn around the team's fortunes, so if Klopp is to be a contender for the Germany job it would be on him to make a major career decision.

At the age of 53, could he take the methods that have served him so well in the club game onto the international stage?

Stefan Kuntz: Ready to step up?

As coach of the Germany Under-21 team, former national team midfielder Kuntz is already working in the DFB system.

To appoint him would seem an easy option, which is not to suggest it would be the wrong option.

Kuntz's young Germany team won the UEFA Under-21 Championship in 2017 and were runners-up two years later, with the likes of Thilo Kehrer, Luca Waldschmidt and Serge Gnabry all enjoying early international experience under his leadership.

Kuntz is highly regarded as a coach by his fellow Euro 96 winner Oliver Bierhoff, who is Germany's national team director, and that could be a significant factor.

Julian Nagelsmann: Too much, too young?

Nagelsmann, who does not turn 34 until July, seems a long shot for this job.

He has greatly impressed as head coach of Hoffenheim and RB Leipzig and his next calling point is likely to be a bigger club job, perhaps in Spain or England.

Nagelsmann distanced himself from the Germany job within minutes of Low's departure being announced, so it would take a change of heart for him to come into the equation.

If the DFB makes a determined play for him, however, Nagelsmann would have to decide whether he could refuse to serve his country.

Veteran Rangnick looked set to join Milan last year, until the surprise element of Stefano Pioli turning the Rossoneri into a winning machine knocked that on the head.

The 62-year-old has been cited as a major influence on the generation that followed him into coaching, with Stuttgart, Hoffenheim, Schalke and Leipzig among the teams he has led.

His tactics typically lean on a high-intensity pressing game, with swift counter-attacking, and Rangnick would surely relish the prospect of leading Germany into a World Cup.

Whether being out of coaching for two seasons might be a hindrance would be a matter for the DFB, with Rangnick's most recent role being when he was employed by Red Bull's sporting division.