Juventus saw their hopes of another Scudetto take a major hit as Filippo Inzaghi got the better of former Milan team-mate Andrea Pirlo. 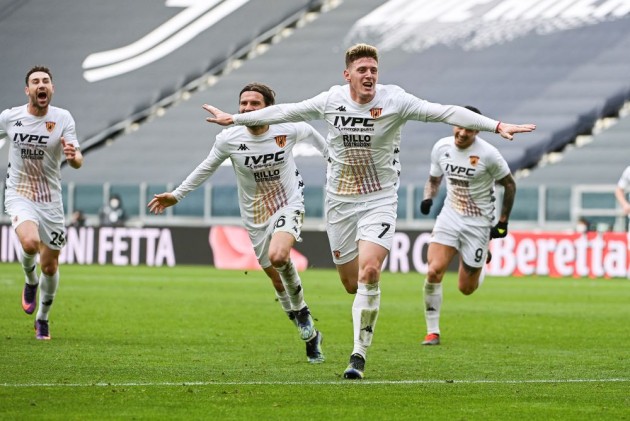 A wretched pass from Juventus midfielder Arthur was seized upon by striker Gaich, who drilled a powerful finish beyond Wojciech Szczesny for the 69th-minute winner.

Coach Pirlo looked askance on the touchline as his team suffered another defeat, with this one leaving them 10 points behind leaders Inter, their hopes of a 10th successive Serie A title in tatters.

They had chances in this game and a penalty decision overturned after a VAR review, but were left counting the cost of one careless mistake.

Cristiano Ronaldo struck a low shot six inches wide of the left post in the third minute, in an early warning from Juventus.

Alvaro Morata, who scored but was also sent off after the final whistle when these sides draw 1-1 in November, was the next Juve player to have a significant sight of goal. The Spanish striker outsmarted the Benevento defence and ran through the centre before his low shot was blocked by goalkeeper Lorenzo Montipo.

Juventus were awarded a penalty in the 35th minute when referee Rosario Abisso thought defender Daam Foulon handled a cross from Dejan Kulusevski, but the official changed his mind after reviewing on a pitchside monitor.

Matthijs de Ligt had a firm header well saved by Montipo, and moments later Ronaldo skilfully volleyed in a cross from Kulusevski but had strayed a yard offside. Ronaldo then tried his luck with a thumping drive from 25 yards, but again Montipo resisted as the half ended goalless.

A drab start to the second half was almost followed by an own goal, with Benevento's Federico Barba turning the latest cross from the right by Kulusevski towards his own goal, with Montipo making a smart reaction save.

Then came the shock of Benevento going ahead, with a terrible pass across the penalty area from Arthur, in the left-back position, intercepted by Gaich. The Argentine striker fended off a weak challenge from Danilo and rammed the ball into the bottom left corner.

Ronaldo failed to put away a late half-chance and Danilo fired over from close range as Juventus scrambled to get back in the game, but it was not their day.