Juventus returned to winning ways in Serie A with a 3-1 victory over strugglers Parma thanks to an Alex Sandro brace and a Matthijs de Ligt header. 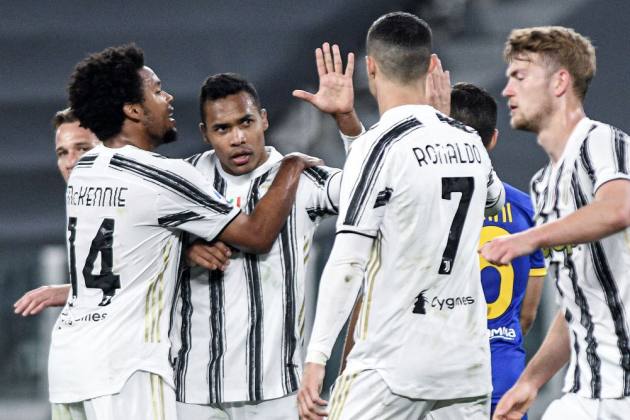 Juve chairman Andrea Agnelli was one of the chief architects of the breakaway plans, which are now in tatters after the vast majority of the 12 clubs involved withdrew their support.

Qualifying for next season's Champions League is now the Bianconeri's immediate aim - assuming they are not banned - and they dug deep to avoid the ignominy of losing to the league's second-bottom side at the Allianz Stadium.

Left-back Alex Sandro struck either side of half-time after Gaston Brugman had opened the scoring for Parma from a free-kick and Matthijs de Ligt added a third as Juve strengthened their top-four hopes.

Cristiano Ronaldo was back in Juve's line-up after missing Sunday's 1-0 loss to Atalanta through injury and he tested Simone Colombi inside the opening eight minutes.

But it was the visitors who took the lead through Brugman's swirling free-kick from 25 yards that left stand-in Juventus goalkeeper Gianluigi Buffon rooted to the spot.

Parma have lost more points from winning positions in 2021 than any side in Europe's top five leagues and they were pegged back just before half-time in Turin.

De Ligt nodded the ball down to Alex Sandro, who used his first touch to flick the ball into the air and his second to blast it away from Colombi on the half-volley.

Alex Sandro added a second 92 seconds into the second half when heading in a Juan Cuadrado cross intended for Paulo Dybala that made it all the way to the back post.

Giuseppe Pezzella went close to levelling with a header that was stopped in front of goal by Arthur - a big moment in the game as De Ligt powered in a header of his own four minutes later.

That set up a serene conclusion to the match for Pirlo's side as they made it four league wins in a row in this fixture for the first time ever.

What does it mean? A welcome win for Pirlo

Five defeats after 31 matches is the most Juve have suffered in Serie A since 2010-11. Another slip-up today against a Parma side doomed for relegation surely would have left Pirlo on the brink of being sacked.

That potentially costly defeat to Atalanta at the weekend, combined with a backdrop of protests and outrage aimed at Agnelli amid the Super League plans, meant nothing less than a victory would do for the Bianconeri to provide some respite.

They survived a scare here to claim a win that moves them into third, one point above fourth-placed Atalanta and five ahead of Napoli in fifth, both of whom have a game in hand.

The attacking full-back took his first goal brilliantly and was in the right place at the right time for the second, with no player on the field able to match his two attempts on target.

With this double - the first in his professional career - Alex Sandro scored more goals against Parma here than he managed in his previous 115 matches in all competitions.

The Portugal international's return to the side was supposed to spell bad news for Parma given that he has scored two or more goals against them in three previous league encounters.

However, he only found the target from one of his four shots - a fairly routine save for Colombi early on - while his passing accuracy of 75 per cent was the lowest of any Juve starter.

9 - Prior to Juan #Cuadrado this season (9) the last defender able to provide at least nine assists in a single Serie A campaign was Pablo Armero in 2011/12 (10). Colombia.#JuventusParma #SerieA

- Juventus have scored in all 26 Serie A home games against Parma.
- Alex Sandro has now scored at least one goal in all six seasons in Serie A.
- Juventus have conceded goals in each of their last eight league games, their longest streak since May 2019.
- Parma have scored in each of their last 11 league games, the best streak for the Gialloblu since August (13).

Juventus are back in league action on Sunday with a trip to Fiorentina, while Parma are at home to bottom side Crotone on Saturday.