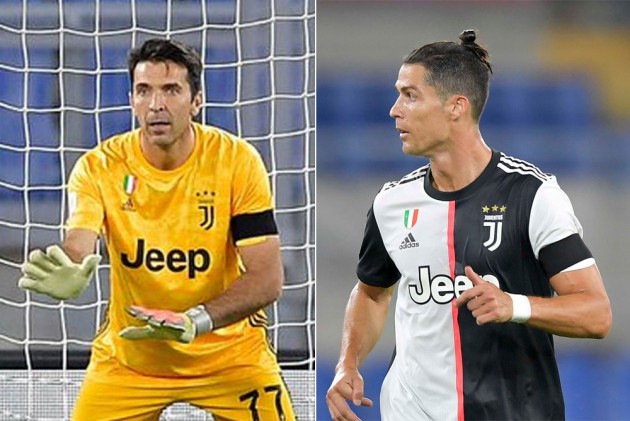 Cristiano Ronaldo scored a stunning goal and provided an assist as Juventus eased to a 4-1 derby win over Torino to open up a seven-point lead at the top of Serie A. (More Football News)

Ronaldo was by no means a constant nuisance to the Torino defence, but the Portugal great turned it on when he needed to, setting up Juan Cuadrado before scoring a brilliant goal of his own on Saturday.

Juve made a lightning start and opened the scoring through a fine Paulo Dybala effort, before Ronaldo teed up Cuadrado – who set up the opener – for their second at the Allianz Stadium.

An Andrea Belotti penalty gave the visitors a lifeline just before half-time, Gianluigi Buffon beaten in his record 648th Serie A appearance.

But Ronaldo struck with a wonderful free-kick in the 61st minute and Koffi Djidji's own goal added to Torino's misery as Juve put further pressure on second-placed Lazio ahead of their clash with Milan.

It took Juve just three minutes to take charge of the encounter, as Cuadrado found Dybala in the box and the Argentinian's quick feet saw him weave past two defenders before slotting home.

Cuadrado was involved again just before the half-hour mark, this time jinking on to his right foot and finishing emphatically after Ronaldo led a counter and set the winger up.

But Torino pulled one back on the stroke of half-time – Belotti slotting a penalty past Buffon after Matthijs de Ligt blocked Simone Verdi's initial shot with his arm.

Torino briefly thought they had levelled early in the second half, but Belotti had strayed offside in the build-up.

Juve increased their advantage just past the hour-mark, as Ronaldo stepped up to a 30-yard free-kick and sent an unstoppable effort into the top-left corner.

The visitors' haplessness was summed up by Djidji's late own goal, the defender turning Douglas Costa's cross past Salvatore Sirigu.

What does it mean? Juve a step closer to the title

Although derby clashes generally produce plenty of unpredictability, contests between these two rarely lead to surprises. After all, before Saturday, Juve last lost at home to Torino in April 1995.

Nevertheless, it was still another hurdle to pass and Juve managed to deal with Torino with minimal fuss.

Ronaldo does what was required

As a player who has produced countless memorable performances across his career, no one will claim this was among the standouts – but you cannot argue he was effective, as he set up Cuadrado and netted his first free-kick for Juve.

1 - Cristiano #Ronaldo has scored his first goal from a direct free-kick for Juventus with his 43rd attempt in all competitions. Unlocked. #JuveTorino

A day to forget for Lyanco

Torino centre-back Lyanco will want to forget about this performance quickly. While not necessarily guilty of gifting any goals away, he will be disappointed he could not do more for Juve's first two.

Juve go to Milan on Tuesday, while Torino host Brescia the following day.