New Zealand's women's Rugby, Football and Cricket icons have come together as the country prepares to host three major World Cups in 2021-22 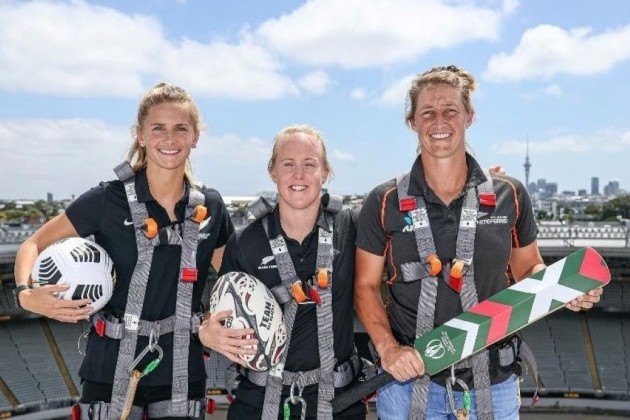 Bowen, a 59-cap football player, Cocksedge, rugby vice-captain, and Devine, the power-hitting skipper of the women’s cricket team, came together in Auckland to promote a remarkable period for female athletes.

“It’s going to be massive for the nation.  I think that it’s going to really help the development of the youth, and we hope to inspire not only young females but also young boys,” she said.

Bowen and his team will be out to make history in 2023 when the eyes of the world will be on New Zealand and co-hosts Australia as they stage the 32-nation global sporting spectacular.

Women’s cricket team captain Sophie Devine has been in the thick of the sporting action in recent weeks, with her side taking on England in an ODI, the visitors triumphant 2-1 and T20I series that concluded yesterday.

Devine, who conquered her fear of heights to join Bowen and Cocksedge atop of Eden Park, said: It’s unbelievable to be a female athlete at this time.

“To have three women’s world cups here in New Zealand over the next three years is just awesome so please get along and support these fantastic athletes,” Devine said.

The Women’s cricket team will next take on Australia in a T20 series beginning March 28. Both England and Australia will return to New Zealand shores in 2022, having already booked their spots at the eight-nation Cricket World Cup.

It was announced last week that Rugby World Cup 2021 would likely be postponed to the end of 2022, and while the delay was disappointing for women’s team but veteran Cocksedge, the anticipation still remains.

“I’m still highly motivated that there is a World Cup on home turf and at the end of the day borders will hopefully be open and we will be able to get lots of support from family and friends and people outside of the country as well,” she said.