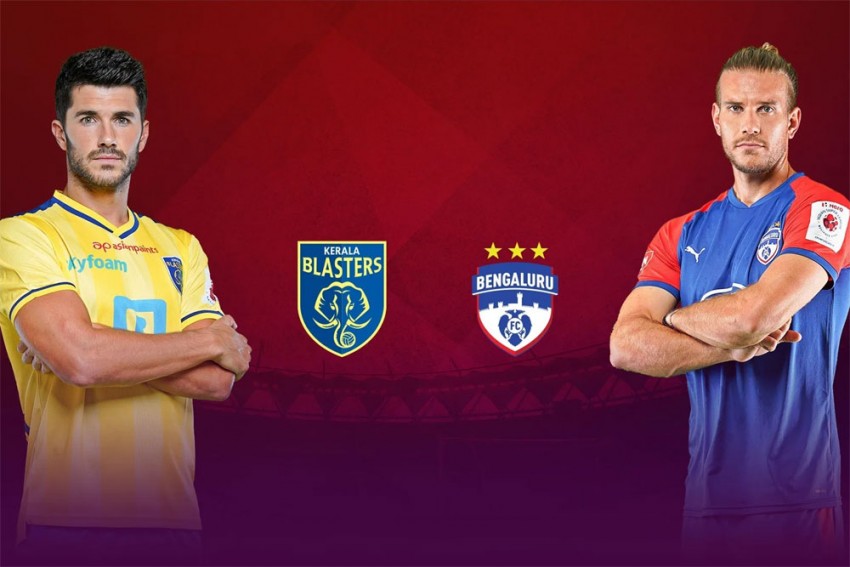 Kerala have conceded 14 goals at home – the highest tally in the division, while Bengaluru have conceded just five goals away from home – the lowest in the league.
Courtesy: ISL
Outlook Web Bureau 2020-02-15T17:36:59+05:30 Kerala Blasters Vs Bengaluru FC Live Streaming: When And Where To Watch Indian Super League Football Match 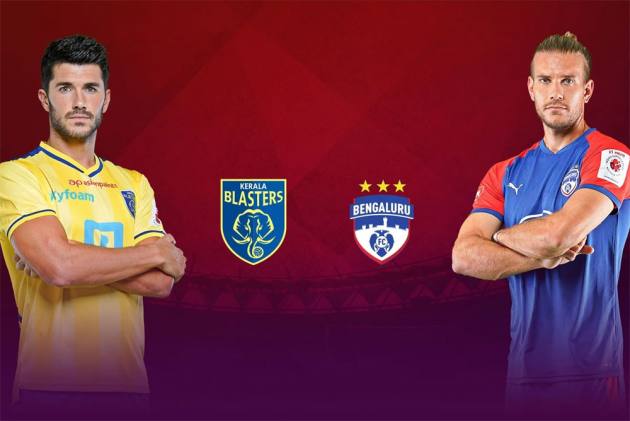 A budding rivalry will be renewed on Saturday when Kerala Blasters take on Indian Super League defending champions Bengaluru FC at the Jawaharlal Nehru Stadium, Kochi. There is no love lost between the two sets of supporters and one can expect the hosts, Kerala Blasters, to come out all guns blazing. (More Football News)

Eelco Schattorie's side, placed eighth on the table, might be out of the reckoning for a play-off spot but would love to get one over a South Indian rival. They are coming off a goalless draw against NorthEast United which extended their winless run to four matches. Many things have gone wrong for Kerala Blasters this season, with defensive mistakes, in particular, costing them a few games. However, their attack has fared better with the likes of Bartholomew Ogbeche and Raphael Messi Bouli leading the charge.

While both the forwards have plundered goals, there has been a lack of support from the rest of the team. In fact, the duo scored 18 of the 23 goals Kerala Blasters scored this season. But their task will be cut out against a Bengaluru FC team who have conceded just nine goals this season. The Kochi-based side have struggled with creativity in midfield as well, with Sahal Abdul Samad relegated to a substitute role mainly while the likes of Sergio Cidoncha have failed to impress. However, Schattorie will be confident of coaxing a performance out of his team against Bengaluru.

Carles Cuadrat's BFC are coming off a 0-0 draw too, against Chennaiyin FC and know that they cannot finish top of the league anymore. Though they have already qualified for the play-offs, they will still want to fight for the second spot which makes it imperative that they pick up a result against Kerala Blasters. However, there are a couple of concerns for him. Captain Sunil Chhetri and defensive lynchpin Juanan Gonzalez are suspended after collecting yellow cards in the last game.

Without Chhetri, Bengaluru's attack has looked mediocre with Udanta Kumam, Ashique Kuruniyan and Deshorn Brown failing to set the league alight so far. But Cuadrat will hope a 9-1 spanking of Paro FC in an AFC Cup qualifier recently that saw the likes of Thongkhosiem Haokip and Brown run riot will infuse some confidence in their attack. But the presence of Dimas Delgado and Erik Paartalu in the midfield provides physique and quality in the middle of the park, something that comes in handy during set-piece situations as well.

All in all, it should make for an intriguing clash at Kochi with Schattorie's side looking for a morale-boosting win at the end of a disappointing campaign while Cuadrat's boys look to finish as high up the table as possible.