Arguably India's greatest footballer after the 'Golden Era' of the last century, Sunil Chhetri has played the most international matches and scored the most goals for the national team. 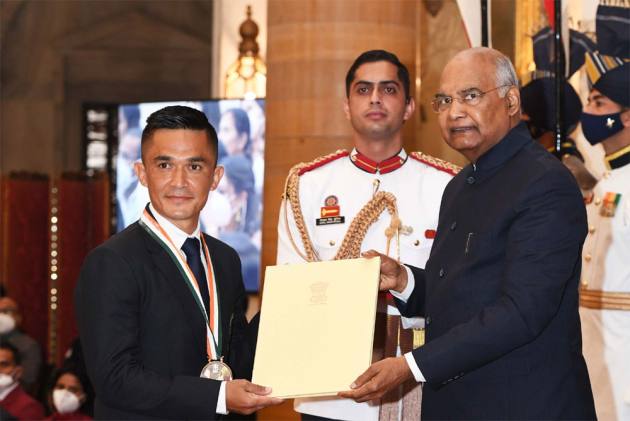 The first footballer to be conferred with the Major Dhyan Chand Khel Ratna Award, Indian maestro Sunil Chhetri on Saturday credited his longevity at the top level as the reason for bagging the highest sporting honour of the country.

The 37-year-old India captain, who began his professional career in 2002 with the famous Mohun Bagan club and made his international debut in 2005, received the Khel Ratna from President Ram Nath Kovind.

"One of the primary reasons why I got the Khel Ratna Award is because I have been playing for 19 years. I want to thank each one of the masseurs, physios and doctors. You superstars have been the main reason why I could be on the pitch," Chhetri said.

"There have so many time when I thought I couldn't, but you guys made it possible for me," he said in a statement issued by All India Football Federation.

He also thanked all the clubs he had played for, his teammates -- both at the clubs and the national team, the fans and his family.

"All these years you have suffered with me, rejoiced with me, you were there at with me at every ups and downs, you dreamt with me -- and I very happily share this Award with each and every one of you."

With 80 strikes from 125 international matches, he is currently tied with Argentine superstar Lionel Messi on number of goals among active players.

He is one of the few Indian footballers who have won the Padma Shri and has also been conferred with the Arjuna Award.

AIFF President Praful Patel congratulated Chhetri on being conferred with the Khel Ratna.

"Congratulations! No one deserves it more than Sunil. He has been the flag bearer and a role model for Indian football, having won so many laurels for his country and all his clubs over the years.

"I wish him all the best in his future endeavours, and look forward together to him leading us to unprecedented glories in near future."

AIFF General Secretary Kushal Das said: "My heartiest congratulations to him. The Major Dhyan Chand Khel Ratna Award is the pinnacle of all sporting awards in the country and Sunil deserves the award.

"He is a living legend, and the icon whom all fans look up to. I wish him all the best for his professional and personal life. You have been a true flag-bearer for Indian football.

"I expect this award to be a motivation to all other Indian footballers, and inspire them to reach higher echelons in their career."