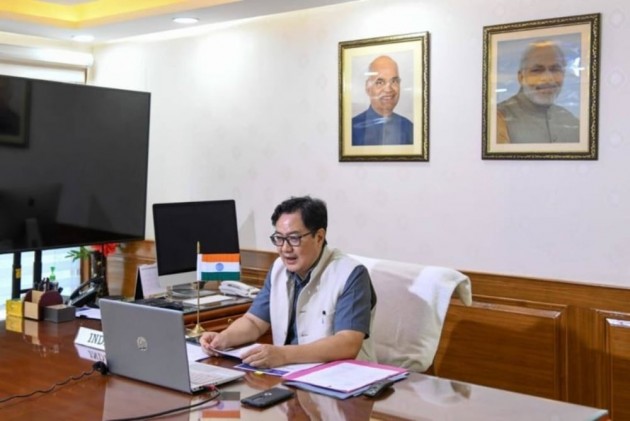 "We will leave no stone unturned," Rijiju said.

He said the 'Target Olympic Podium Junior Scheme' is scouting talent as young as 10-year-old and 12-year-old with an aim to prepare them for the Los Angeles Games.

He was speaking about the objectives and goals India wants to achieve in the coming years during the India Today Mindrocks event.

"We look forward and realise the dreams of every Indian to make India a great sporting powerhouse," he said.

Rijiju said the talented youngsters will be guided by a world-class coaching facility during their journey to become world champions.

"Objectives are very clear, we have created the 'Target Olympic Podium Junior Scheme' that means those who are 10-13 years of age will be ready to become world champions by 2028 Los Angeles Olympics.

"By starting the scheme we are identifying the young talents, it's a process of talent scouting at a young age and taking full responsibility of their training by bringing in world-class coaches."

Rijiju added that steps like enhancing the skill sets of Indian coaches, removal of Rs 2-lakh salary cap for coaches and extension of coaching tenures will bring positive changes in the system.

"I have recently decided to extend the tenure of coaches, Indian coaches are being enhanced and the 2-lakh salary cap of coaches has also been removed.

"By 2028, the target of getting India in the top-10 of Olympics medal ranking will be realised. I am very clear. We started planning and executing those plans," Rijiju said.

He also reiterated that there is a need to create a sports culture to help India becoming a sporting powerhouse.