KL Rahul And The Art Of Shutting Out Noise, 'Some Critics Always Want To Pull You Down' 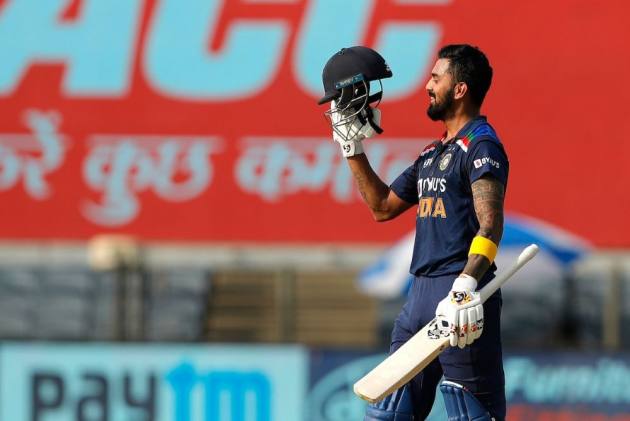 But in Pune, Rahul, who captains Punjab Kings in IPL, seems to have turned a new leaf. An unbeaten 62 in the first ODI was followed by a century in the second ODI at Pune's MCA Stadium on Friday.  Rahul had a unique 'shut out the noise' celebration after reaching the three figure mark.

“It was to shut out the noise, no disrespect, but there are people out there who will try to pull you down and criticise," Rahul explained.

"Scoring runs make you more confident, I was disappointed I couldn't score runs in the T20s, but sometimes you have to go through the journey. Today, it was important to get that partnership with Virat, and Rishabh, and playing my roles with responsibility,” the Karnataka batsman added.

While his fifty in first ODI came when India was already going great guns, his knock in second ODI which brought up his fifth century of his career came  when his team needed it the most.

Reece Topley and Sam Curran had dealt India a twin blow in the form of  removing Shikhar Dhawan and Rohit Sharma with just 37 runs on the board.

India needed a big effort from skipper Virat Kohli and Rahul. While Kohli was typical self, gathering quick singles, Rahul restrained himself and was watchful at the start. But after reaching fifty, Rahul and Kohli changed gears as India started to attack England bowling.

Rahul then put his foot on the accelerator, while mostly relying on pulls and drives.

In the end the batsman was happy with a 330 plus score and said, "When Virat and I were in the middle, 300-plus was what was required keeping in mind the way England bat. Very happy, to get to 330-plus."