Sent in to bat, Punjab could manage 125 for 7 but the bowlers produced a clinical performance to restrict Hyderabad to 120 for 7 and keep their IPL play-off hopes alive. 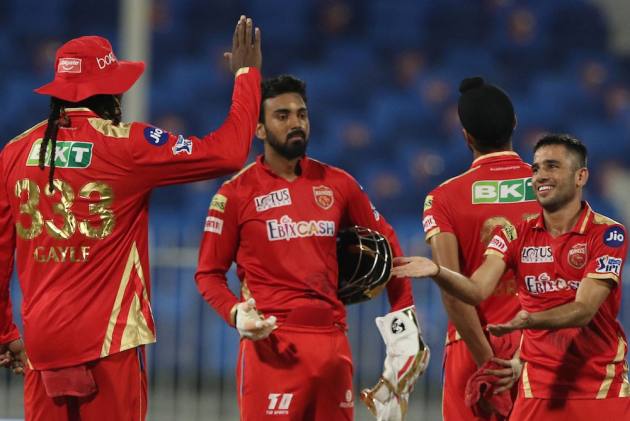 After registering a thrilling five-run win against Sunrisers Hyderabad in a crucial Indian Premier League (IPL) 2021 match at Sharjah on Saturday, Punjab Kings skipper KL Rahul hailed his bowlers, saying they can restrict any opposition if they have decent runs on the board.

"We wanted to get another 20-30 more runs but we'll take the win. It gives us a belief that no matter what the situation is, our bowlers can get the opposition out if we get a decent score," Rahul said in the post-match presentation.

Sent in to bat, Punjab Kings could manage 125 for 7 on a slow wicket but the bowlers produced a clinical performance to restrict SRH to 120 for 7 in 20 overs and keep their IPL play-off hopes alive.

"(Mohammed) Shami to start of, bowled really well, getting two big batters in (David) Warner and (Kane) Williamson. Made it easier for our spinners to settle into a nice line and length."

The 21-year-old Ravi Bishnoi (3/24) was the pick of the bowlers as he ran through the SRH middle order after Shami rocked the run chase early on by dismissing both David Warner (2) and captain Kane Williamson (1) cheaply in the first and third overs respectively.

Punjab, however, didn't put up a good show with the bat and Rahul said that the batters should realise that they need to approach their batting after assessing the conditions.

Rahul also praised West Indian Jason Holder (3/19, 47 not out) for his all-round show.

"He (Holder) played exceedingly well. First with the ball, taking those two wickets in an over and then batted really well, on a track where it was difficult to play the big shots."

The defeat ended SRH's hopes of making it to the play-offs.

Captain Kane Williamson, however, appreciated the efforts of the bowlers on a tough wicket.

"The bowling unit, fielding unit did a fantastic job. Certainly the surface was a tough one. Required partnerships and we were certainly backing ourselves to get close," he said.

"It took a brilliant individual performance in both halves from Jason Holder, especially with the bat to keep the match competitive. It's (SRH) a proud franchise, frustrating season.

"We do need to look for areas to improve...We need to come to the next game with fresh eyes and freedom. We will try and put in the best. Smart cricket needs to be played with different surfaces."

Holder, who was adjudged the Player of the Match, said it was a "tough loss".

"Halfway we were in the game. Left a little bit too much in the back end to do. It was good to get a good start (with the ball) ... I just wanted to give myself a chance and strike well.

"Obviously, we have five games left and these are important games for us... The fans are always behind us, so got to play for them."