Vanessa Bryant saluted her late husband Kobe as he was inducted into the Basketball Hall of Fame: 'You're a true champ' 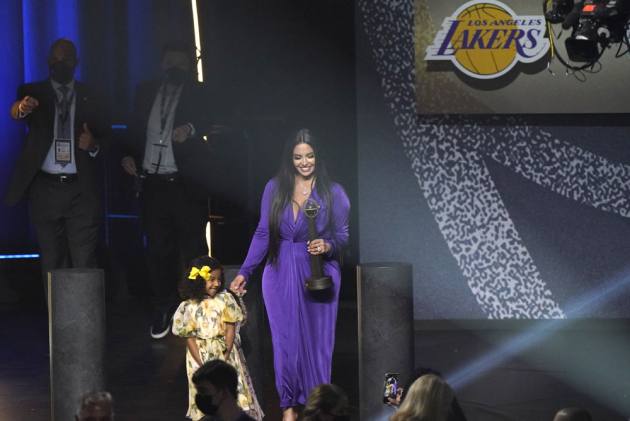 Kobe Bryant's wife Vanessa paid tribute to the late NBA legend Saturday as he was inducted into the Naismith Memorial Basketball Hall of Fame, congratulating him on joining the sport's all-time greats. (More Sports News)

Michael Jordan escorted Vanessa Bryant onto the stage before she stepped to the microphone to speak about how much the moment would have meant to her husband.

Kobe Bryant, his daughter Gianna, and seven other people died in a helicopter crash in California in January 2020. Bryant was 41 years old.

Vanessa Bryant said she did not prepare a speech for the occasion, since her husband always spoke off the cuff.

"However, I do know that he would thank everyone that helped him get here – including the people that doubted him and the people that worked against him and told him that he couldn’t attain his goals," she said.

"He would thank all of them for motivating him to be here. After all, he proved you wrong."

The story of Kobe Bryant, as told by his fellow Hall of Famers. #20HoopHall pic.twitter.com/ugD3dpiTsk

Bryant went straight from high school to the NBA in 1996, only the sixth player to do so, and spent his entire 20-year career with the Los Angeles Lakers.

He made the All-Star team 18 times, was named first-team All-NBA 11 times, and led the Lakers to five NBA championships before retiring following the 2015-16 season.

Few can match his resume, but Vanessa Bryant said entering the Hall of Fame cemented her husband's place in basketball history.

"Congratulations, baby. All of your hard work and sacrifices paid off," she said.

"You did it. You’re in the Hall of Fame now. You’re a true champ. You’re not just an MVP, you’re an all-time great.

"I’m so proud of you. I love you forever and always, Kobe Bean Bryant.”