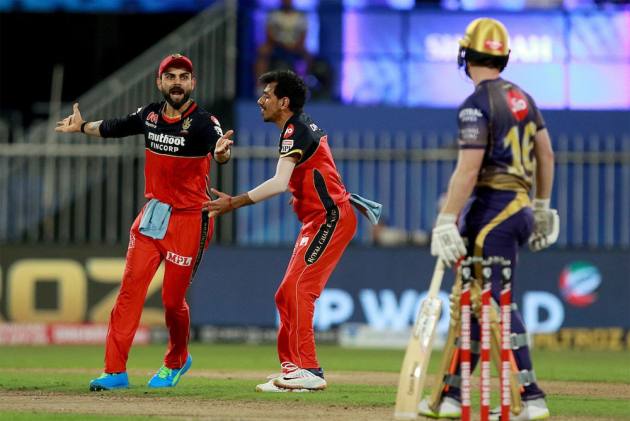 All eyes will be on Virat Kohli when Royal Challengers Bangalore (RCB) resume their Indian Premier League (IPL) 2021 action with a fixture against Eoin Morgan's Kolkata Knight Riders at Abu Dhabi on Monday.

RCB on Sunday confirmed that Kohli will step down as the RCB skipper after the end of the season. The 32-year-old had already announced that he will not lead the Indian national team in the T20s. So, 'what he does next' is what everyone wants to know.

But RCB, despite their lack of titles, have always been a team to beat. They are an ensemble of a veritable lineup of stars. Besides the skipper, who's one of the highest-earning players in the IPL, AB de Villiers remains a key player. Then there are match-winners like Glenn Maxwell, Kyle Jamieson, Mohammed Siraj, Tim David, Yuzvendra Chahal, etc.

For KKR, it's now or never. The two-time champions are seventh in the eight-team league, having won only two in their previous seven outings this season.

But as Morgan said, they are now a dangerous side with nothing to lose. After the coronavirus-induced break and with a change of scenery, from India to the UAE, probably they can hope for a turnaround.

And in fact, they have the personnel to mount a serious challenge even in the second half as witnessed in the previous season. But again, the moot point is -- have they left it too late.

The absence of Aussie all-rounder Pat Cummins will be a big miss.

This will be their 28th meeting. RCB lead the head-to-head record 14-13. In the last meeting, earlier this season, Glenn Maxwell and AB de Villiers helped RCB post a massive 204 runs, which eventually proved more than enough. KKR lost the match by 38 runs.