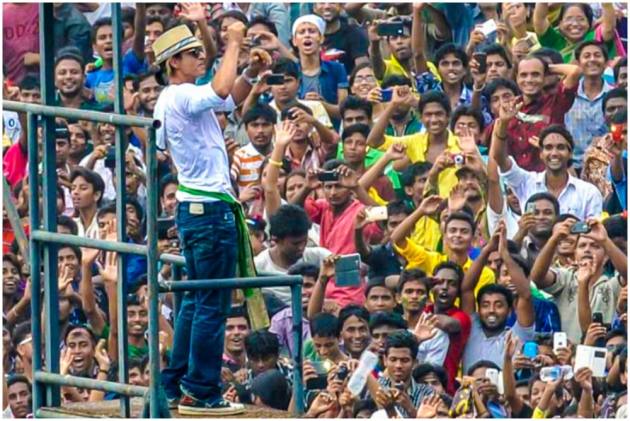 Shah Rukh Khan turned 56 on Tuesday and Kolkata Knight Riders, the Indian Premier League team that the Bollywood superstar co-owns along with actress Juhi Chawla, wished him on his birthday.

Shah Rukh Khan is extremely popular with KKR fans and his association with Eden Gardens is simply unbelievable. However due to the COVID pandemic, Kolkata Knight Riders have played away from 'home' in 2020 and 2021.

In IPL 2020, KKR played all their matches in the UAE. The 2021 IPL was partly held in India but no team played at their 'home' The second half of IPL 2021 was played in UAE and unlike 2020, KKR made the playoffs but lost to Chennai Super Kings by 27 runs.

Shah Rukh Khan was conspicuous by his absence in UAE this time. His presence has lifted team spirit in earlier seasons but KKR did very well in the UAE leg of IPL this year.

The Badshah of Bollywood,
The Raees of On-Screen Romance,
The Self-made Super Star,
One of the most Chivalrous Celebrities and Humble Human beings !

May you Find, what you Seek
May u make Joyous, all that is Bleak#HappyBirthdaySRK âÂÂÂ¨

The last few weeks have not been very happy for Shah Rukh Khan. His son Aryan Khan was languishing in jail after he was nabbed by Narcotics Control Bureau in a drugs case on October 3. After 22 days in jail, Aryan Khan was released on bail on Saturday.

As per reports, Shah Rukh Khan and his family were not at 'Mannat,' the house where the KKR co-owner lives in Bandra, Mumbai. SRK was apparently celebrating quietly at Alibaug, a coastal town south of Mumbai.

KKR fans, a huge section of whom are also SRK fans, did not care where the Bollywood 'Badshah' was or what was the issue with Aryan Khan.

Shah Rukh Khan remains a huge brand ambassador for Kolkata but given the anxious times that await the SRK family, KKR's theme song 'Korbo, Lorbo, Jeetbo,' ('Will do, will fight and win win') perhaps sits very appropriately on the Shah Rukh Khan family.