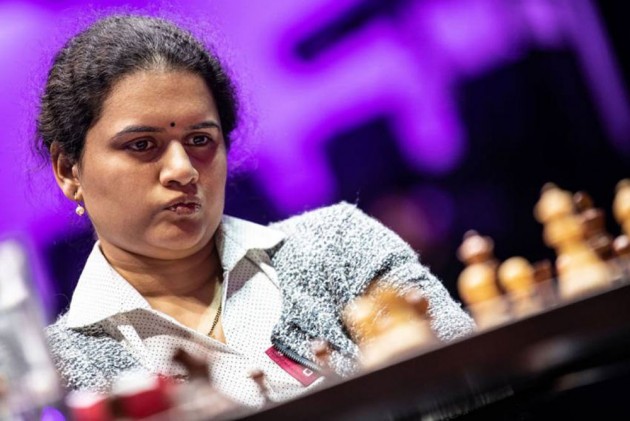 India's top player Koneru Humpy pulled off a 6-5 win over world no.1 Hou Yifan of China on Friday to reach the final of the fourth and final leg of the Women's Speed Chess Championships. (More Sports News)

Humpy, the world rapid champion, overcame her Chinese opponent in a close match with the Indian winning the decisive bullet game at Chennai

The Indian, ranked no.2, began in right earnest and won the opening game.

However, Yifan fought back and the duo, which had fought it out in the women's world championship match in 2011, were involved in a close battle.

Humpy, however, held her nerve and clinched a spot in the final by taking the bullet game.

After a first-round loss in the opening leg, Humpy played in the third leg and lost in the quarterfinal before turning things around in the final leg.

Former world champion Alexandra Kosteniuk of Russia meets Sarasadat Khademalsharieh of Iran in the other semifinal.

This is the final leg of the Grand Prix with a total of 21 participants. Each of the 21 players participates in three out of four Grand Prix legs. Each GP is a 16-player knockout event.

In each Grand Prix leg, every player scores cumulative grand prix points according to the position in the final standings.

The two players who score the highest number of cumulative grand prix points in all three Grand Prix legs qualify for the Super Final to be held on July 20.