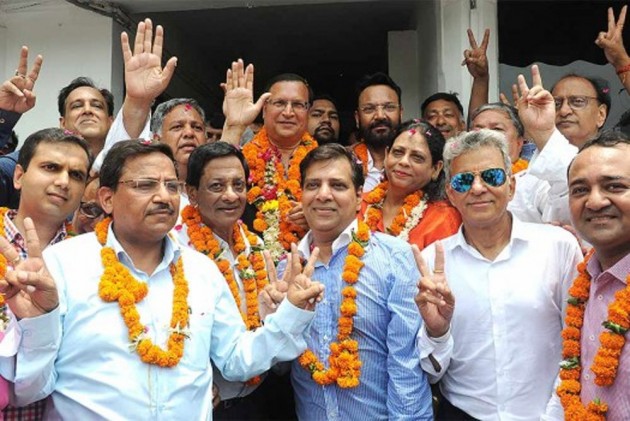 ‘It ain’t over until the fat lady sings’. Thus goes a famous proverb, and it perfectly fits in the ongoing melodramatic farce being enacted at the Delhi and District Cricket Association (DDCA). Its president Rajat Sharma, who admitted to a host of problems even during his short tenure while resigning two days ago, took an about-turn on Monday and decided to return after the Ombudsman dramatically “directed” him to stay put on Sunday. (More Cricket News)

Sharma, who had told Outlook on November 16 that there was no question of a rethink on his resignation, promptly declared on Monday that he was back. “I am sticking by it [resignation]. Why should I have second thoughts about it? I have thought about it very clearly, written, and given it. So, no second thoughts,” Sharma had told Outlook on Saturday, when asked if there was a chance of a re-think. On Monday, Sharma in his message to DDCA members wrote: “In deference to the orders of Hon’ble Ombudsman, I have assumed the charge of the office of President, DDCA with immediate effect.”

In his order, Ombudsman Badar Durrez Ahmed, a former Jammu and Kashmir High Court Chief Justice, described the prevailing circumstances at the DDCA as a “very serious and anarchic situation”. Besides ‘re-installing’ Sharma, he stopped ‘suspended’ secretary Vinod Tihara, who is at loggerheads with Sharma, from taking resuming his duties, a mandate that eight of the 16 members of the Apex Council had given him on Saturday. The Ombudsman has fixed the hearing on November 27. That day, by a coincidence, the Supreme Court is also scheduled to hear the BCCI reforms case.

Interestingly, the order was circulated on WhatsApp with amazing quickness while the Ombudsman section on the antiquated DDCA website remained completely blank. Ahmed has passed a few orders since being appointed last year, but none of it is visible on the DDCA website.

By Monday evening, Sharma’s key supporters on whose shoulders he rode to power just a year ago had hit back, telling him that once he had resigned it remained that way and that his “mail stating your rejoining is null and void”. They also told Sharma that Section 168(1) of the Companies Act 2013 makes it clear that “resignation by a Director will be effective once served to the Company. There is no provision mentioned in the Companies Act 2013 to withdraw the resignation once submitted to the company”. In their signed letter addressed Sharma, the eight members also quoted a couple of High Court orders on the issue, including one involving cricketer Gautam Gambhir who, interestingly, was one of the three government nominated directors on the DDCA Apex Council when Rajat Sharma Group strode to power with a 12-0 clean sweep on July 2 last year.

Sharma had resigned when it became clear to him that his own key supporters, without whose backing he probably wouldn’t have won the election so emphatically, had turned the tables on him in a secret meeting close to the midnight of November 16.

On Sunday, three Sharma loyalists -- Rajan Tewari, who is a government nominee on the Apex Council, Darshan Singh, and Siddharth Singh – complained to the Ombudsman who “stayed” the next Apex Council meeting that had been already been convened on Tuesday. However, the defiant eight are adamant on convening the meeting on Tuesday. “We are going ahead with the Apex Council meeting, at 7.30 pm at Ferozeshah Kotla on Tuesday. But we respect the decision of the Ombudsman and we will not take up the issues that he has asked us not to touch. We will, however, discuss other matters. The majority [of the Apex Council] is with us and we will show that at a press conference we have convened at 5 pm on Tuesday,” Manchanda told Outlook.

Earlier on Monday, Sharma, along with his key administrators who had also resigned along with him on Saturday, “assumed charge” again as they reached the Feroze Shah Kotla at around 4 pm. Sharma left the premises after some time. The eight Apex Council members opposing him were already at the Kotla when Sharma landed there, but there were reportedly no sparks.

Amid all this drama, unfortunately cricket took a back seat. “As has always been the case in the DDCA, a motley group of self-centred people – they do not necessarily belong to a particular faction as groups are formed and dismantled as per the convenience at the DDCA -- are locked with each other to wrest power and control of the DDCA,” said a neutral observer.

As the power struggle is on, it is no coincidence that the BCCI is about to release a huge sum, running into several crores, due to the DDCA. A Supreme Court-appointed Committee of Administrators had held up this amount, like it had done with other state associations, even as cricket was taken care of. According to Sharma, DDCA presently has about Rs.25 crores in its coffers. This figure is expected to double, or even more, when the BCCI releases the DDCA’s dues. “With more money maybe the power struggle would also intensify further,” said the observer.

As is obvious from the dramatic events so far, the proverbial ‘fat lady’ hasn’t even arrived at the Kotla, so her turn to sing is not going to happen anytime soon.