Paris Saint-Germain retained their Coupe de France crown as Kylian Mbappe turned in a star display in a 2-0 win over Monaco at the Stade de France. 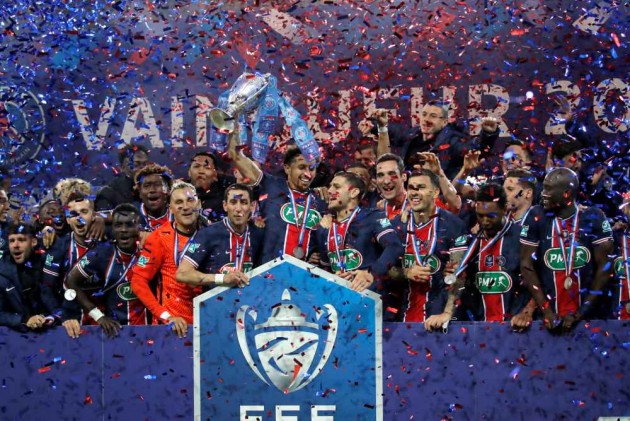 Paris Saint-Germain retained their Coupe de France crown as Kylian Mbappe turned in a star display in a 2-0 win over Monaco at the Stade de France. (More Football News)

Without the suspended Neymar, PSG relied on Mbappe in Paris and the former Monaco prodigy delivered with an assist for Mauro Icardi's opener before rounding off the win himself late on.

Trailing from the 19th minute, Monaco huffed and puffed, but the closest Niko Kovac's team came to an equaliser was when Gelson Martins' deflected cross clipped the crossbar.

Monaco's defeat in their first appearance in a Coupe de France final in 11 years was sealed with nine minutes remaining, Mbappe dinking home to seal PSG's 14th triumph in the competition.

Neymar may have been missing for Mauricio Pochettino's side, but PSG's other key man was at the heart of their opener.

Having pounced on Axel Disasi's heavy touch following a goal-kick, Mbappe kept his cool to tee up Icardi for a simple finish into an empty net.

Alessandro Florenzi drew a save out of Radoslaw Majecki as PSG pressed for a second, though Keylor Navas had to smother Kevin Volland's header at the other end.

Wissam Ben Yedder will be at Euro 2020 after another excellent season, but the France forward – and Monaco's talisman – was replaced after an hour without having registered a shot as PSG continued to keep Kovac's men at arm's length.

Fortune was on PSG's side with 20 minutes remaining – Gelson's cross, which took a deflection, hitting the woodwork after looping over Navas.

Krepin Diatta snatched at an effort from inside the area, though Monaco looked short of ideas, and moments after striking the bar with a long-range chip, Mbappe made sure of the win when he raced onto Angel Di Maria's pass and lofted in a neat finish.

What does it mean? Two down, one to go for Poch?

Mauricio Pochettino has now won both of the domestic trophies so far on offer to him during his time at PSG, having triumphed in the Trophee des Champions shortly after his appointment, and the Ligue 1 title is not at all out of the equation heading into the final game of the season.

PSG face Brest, and a win would see them snatch the title from Lille's grasp should Les Dogues drop points against Angers. Monaco, meanwhile, are in pole position to take the final Champions League spot, albeit they could yet finish second if results go their way – the alternative, however, is fourth, and a disappointing end to a promising campaign.

Mbappe comes up trumps once more

Mbappe's absence was felt when PSG crashed out of the Champions League to Manchester City earlier this month, but he stood up to be counted this time around to lead his team to yet another trophy.

The 22-year-old finishes this Coupe de France campaign with eight goal involvements (seven goals, one assist) from five matches, exceeding his previous best performance in the competition, which was seven direct goal involvements in 2017-18.

Disasi flops on the big stage

There was no hiding for Disasi in the cavernous Stade de France, albeit one saving grace for the Monaco centre-back will have been the lack of fans in attendance, after his calamitous error gifted PSG the lead.

He was subbed off after 74 minutes, having registered a joint game-high four interceptions, but it was the heavy touch which put Monaco up against it that his performance will be remembered for.

PSG round off their season against Brest on Sunday, with their title chances still firmly intact. Monaco will look to ensure a Champions League place by beating Lens.