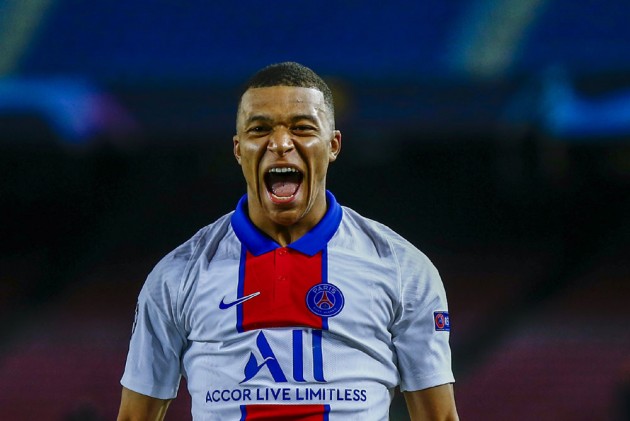 The Paris Saint-Germain jersey worn by Kylian Mbappe when his hat-trick helped humiliate Barcelona could have sold for millions at auction but the French ace simply handed it over as a gift to UFC great Khabib Nurmagomedov. (More Football News)

Mbappe's devastating display of pace, power and clinical finishing crushed Barca in PSG's thumping 4-1 triumph in the opening leg of the Champions League last-16 tie, and left the hat-trick hero as the talk of the football world following one of the most scintillating performances of his glittering young career.

Uncertainty has been circling Mbappe, whose PSG contract expires in June 2022 amid strong links to Real Madrid as well as Liverpool, and the World Cup winner clearly had no intention of making the shirt a centrepiece of his own personal collection following Tuesday's exploits.

Instead, Mbappe presented the jersey to mixed-martial arts star Khabib after the UFC's longest-reigning lightweight champion watched the action unfold from the stands in Barcelona, alongside Leeds United's majority owner Andrea Radrizzani at Camp Nou.

Khabib recently vacated his title and retired from UFC competition, revealing he wants to switch the gloves for boots and give professional football a try after discussing the career change with the likes of UEFA president Aleksander Ceferin and Juventus superstar Cristiano Ronaldo.

The unbeaten Russian fighter previously told Match TV: "To play football on a professional level is a childhood dream. Of course, I have such a wish. Football is the king of sports after all."

Mbappe had written a message to Khabib on the jersey, and the man also known as 'the Eagle' was quick to show off his new prized possession to his 27.3million Instagram followers.

Khabib was in attendance for Barca vs PSG in the Champions League and he got Kylian Mbappé's jersey pic.twitter.com/5phcfNdujC