La Liga 2019-20 Title Race: How The Big Three Stand At The Halfway Stage In Spain

For the first time since 2016-17, La Liga seems set to have a real title race. We assess the three heavyweights set to fight it out 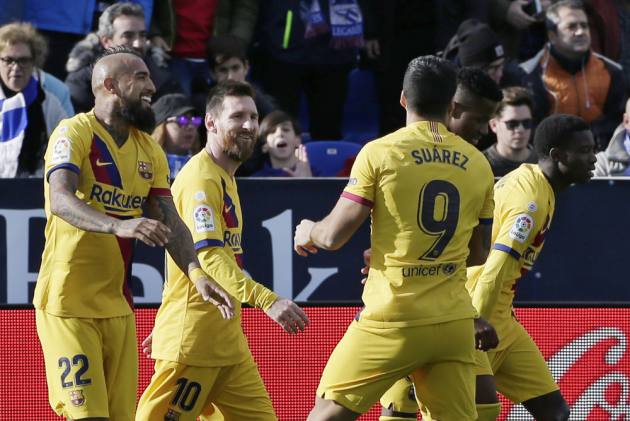 So, 19 games in and the big three are exactly where you would expect them to be in the La Liga table. (More Football News)

Saturday saw all three teams in action following the resumption of top-flight action in Spain, with leaders Barcelona conceding late to lowly Espanyol as they were held to a 2-2 draw in an entertaining derby.

While Barca remain on top, Real Madrid are now level on points with their rivals after a 3-0 triumph away at Getafe. As for Atletico Madrid, they overcame Levante 2-1 at home to make it four wins on the spin in all competitions, keeping them in touch with the top two ahead of what could be an intriguing battle (after all, Sevilla are level on points with Atleti, too).

There has not been a genuine title race in the competition since Real Madrid were crowned champions in 2016-17. After processions in the previous two seasons, Barca look to have a fight on their hands to retain the trophy.

We take a look at the state of play for all three of Spain's big guns as they prepare to halt league duties temporarily again at the halfway stage, this time to take part in the Supercopa de Espana in Saudi Arabia.

Real Madrid's win sees them draw level with Barça at the top of #La LigaSantander! pic.twitter.com/0s0iH9kYSE

Positives: Lionel Messi, of course. The Argentina forward has, not for the first time, dragged his team-mates along in games. Luis Suarez continues to be productive – he brilliantly made one goal and scored the other against Espanyol – and Barca are comfortably the competition's leading scorers, even if Antoine Griezmann has, so far, failed to fully deliver since his big-money move to Camp Nou. The development of Ansu Fati, whose meteoric rise has helped cover for Ousmane Dembele's absences, has been an undoubted plus, too.

Negatives: What difference has Valverde really made to the team he inherited from Luis Enrique in 2017? Back-to-back league titles is an impressive achievement, obviously, but stunning Champions League exits to Roma and Liverpool in the previous two seasons weigh heavily on his shoulders. As for the team itself, the strong spine that has been a characteristic of Barca for many seasons is starting to feel the strain. Gerard Pique and Sergio Busquets are no longer at the peak of their powers and they have already shipped 23 league goals. Valverde also needs to work out his best combination in midfield, though he may have to wait until Arthur is fit to settle on an ideal line-up.

7 - @FCBarcelona claimed #La Liga Champion in seven of the last eight season when they leaded the competition in the mid-season. The only exception was in the 2013/2014 season when Atlético de Madrid recorded the title. Equator#FCB #FCBarcelona pic.twitter.com/EkWGSkFINQ

Positives:  It has not been plain sailing for Zidane in his second spell in charge, with the first half of the campaign including a hammering against Paris Saint-Germain in Europe and a humbling at the hands of Real Mallorca. Still, he has built from the back, goalkeeper Thibaut Courtois regaining his form to back up a defence that has conceded just 12 times in La Liga. At the other end, Karim Benzema continues to lead the way, scoring 12 times and also providing five assists, while Federico Valverde has developed into such a consistently strong midfielder that talk of signing Paul Pogba has quietened, if only a little.

Negatives: Benzema cannot be relied on to do all the heavy lifting. Eden Hazard has only been able to show flashes of his talent since joining from Chelsea, the Belgium forward hampered by injuries, while Gareth Bale has been in and out of the team. Rodrygo Goes has shown flashes of promise, seeing him overtake fellow Brazilian Vinicius Junior in the pecking order. It feels as if an era will soon come to an end at Madrid, but an ageing squad knows how to prevail in the big moments. This could well be the last hurrah for some big names in the Spanish capital – do they have the stamina to go the distance and finish as champions?

1 - This has been Getafe's biggest defeat in La Liga under José Bordalás (since August 2017). Novelty. pic.twitter.com/17i0DgcJ9b

Positives: No matter who they buy, and no matter what happens in friendlies (remember Atleti stuck seven past Real Madrid in a pre-season fixture last July), this still has all the trademarks of a Diego Simeone side. Some of the familiar old faces may have gone but they remain solid in defence and workmanlike going forward. Simeone builds his teams from the back – and this current version have only given up 12 goals, even while bedding in new players. Alvaro Morata has stepped up in the absence of Diego Costa, who appeared to be in a state of decline prior to his current injury, and they do have a plethora of hard-working midfielders to rotate down the stretch.

Negatives: Goals. Well, a lack of them actually. Morata is their leading scorer in the league with nine, ahead of Angel Correa on three, and next on the list is Joao Felix with two, but the Portuguese forward has started 2020 stuck in a drought. Atleti have managed to find the net 22 times in 19 games, which perhaps explains why they have been linked with moves for Edinson Cavani and Paco Alcacer during the January window. Plus, for all their focus on keeping clean sheets, they still have to lean on the outstanding Jan Oblak at times to make key saves. The goalkeeper demonstrated as much against Levante, twice denying the visitors in the closing stages to preserve a slender lead at the Wanda Metropolitano.

14 - Jan Oblak has saved 14 of the last 17 shots on target he has faced for @atletienglish in @La LigaEN (three goals conceded), including the last two against Levante. Hero. pic.twitter.com/sL84DRJ2lv

Negatives: Goals. Well, a lack of them actually. Morata is their leading scorer in the league with nine, ahead of Angel Correa on three, and next on the list is Joao Felix with two, but the Portuguese forward has started 2020 stuck in a drought. Atleti have managed to find the net 22 times in 19 games, which perhaps explains why they have been linked with moves for Edinson Cavani and Paco Alcacer during the January window. Plus, for all their focus on keeping clean sheets, they still have to lean on the outstanding Jan Oblak at times to make key saves. The goalkeeper demonstrated as much against Levante, twice denying the visitors in the closing stages to preserve a slender lead at the Wanda Metropolitano.