The 0-0 draw against Cadiz left Real Madrid six points clear at the top of La Liga 2021-22 table. Granada's Jorge Molina, at 39 years and 241 days, became the oldest to score a hat-trick in the top five European football leagues. 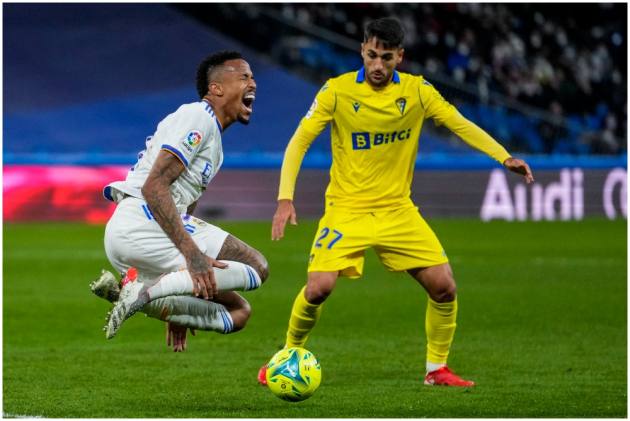 Depleted by coronavirus infections, Real Madrid was held 0-0 at home by Cádiz in the La Liga 2021-22 to end its 10-game winning streak across all competitions. Jorge Molina struck three times in Granada’s 4-1 win over Mallorca to become the oldest player — at 39 years and 241 days — to score a hat-trick in the top five European leagues. (More Football News)

The stalemate against Cádiz leaves Madrid six points clear at the top. It came a day after second-place Sevilla cut into Madrid’s lead by beating defending champion Atlético Madrid 2-1.

Modric’s place in the starting 11 is unquestioned while forwards Rodrygo and Asensio share time in Ancelotti's rotation. Bale and Marcelo, once stars, are rarely used substitutes. Cádiz, struggling in the relegation zone, frustrated Madrid by aligning nine players in two tight lines in front of its area.

When Madrid did manage to work its way through, goalkeeper Jeremías Ledesma was there to save the visitors. “We succeeded in making it an ugly game,” said Cádiz coach Álvaro Cervera.

Madrid went no closer than Federico Valverde's long-range strike which was parried by Ledesma midway through the first half. Ledesma also did well to block Karim Benzema's late free kick.

“When you play against a team that shuts up shop, you need forwards who can go after crosses. And we don't have players like that,” Ancelotti said. “I am not saying I don't want Benzema on my team, I always do of course, but he is not that type of player.”

Cádiz had upset Madrid last season when it won 1-0. Substitute Álvaro Negredo came close to pulling off another surprise when Cádiz finally succeeded in launching a counterattack, only for the veteran striker to roll his strike wide.

The virus outbreak gave Eden Hazard a rare chance to play a complete match for Madrid. The Belgium forward, who cost Madrid 100 million euros in 2019, hadn't started a match since September, when he was part of the lineup that was embarrassed 2-1 at home by Moldovan side Sheriff in the Champions League.

The former Chelsea star, who has suffered multiple injuries since moving to Madrid, had a quiet first half. He managed a glancing header that Ledesma saved shortly after the restart.

Molina is the oldest player to score a league hat trick in the top tiers of Spain, England, Germany, Italy and France, according to Opta. The striker didn't debut in the first division until he was 29, but he then played long stints with Real Betis and Getafe before joining Granada last season.

“This only gives me even more reason to keep enjoying this sport,” Molina said. “I am motivated to keep going as long as my body holds up.” Molina has credited his attention to rest, a good diet, and regularly fasting for stretches of 16 hours as key to prolonging his career.

Inaki Williams scored a brace and Óscar de Marcos struck the 90th-minute winner to lead Athletic Bilbao to a 3-2 victory over Real Betis, ending an eight-round winless streak for the Basque club. Betis, which had won three straight in the league, remained in third place.

Bilbao hadn't scored more than two goals in a game all season and had been plagued by its poor finishing in recent weeks. Betis got goals from Nabil Fekir and Juanmi Jiménez, whose 11 goals are only second to Benzema's 13 in the league.

Darío Poveda headed home Damian Suárez's cross in stoppage time to snatch Getafe a 1-0 win over Osasuna that lifted it out of the relegation zone. Getafe got the much-needed win after it was humiliated 5-0 by third-tier club Atlético Baleares in the Copa del Rey.