With this win, Real Madrid on 39 points, are eight points clear of second-placed Sevilla in the La Liga 2021-22 table. Barcelone remain seventh with 23 points. It was also Barca's first loss in the La Liga since Xavi took over. 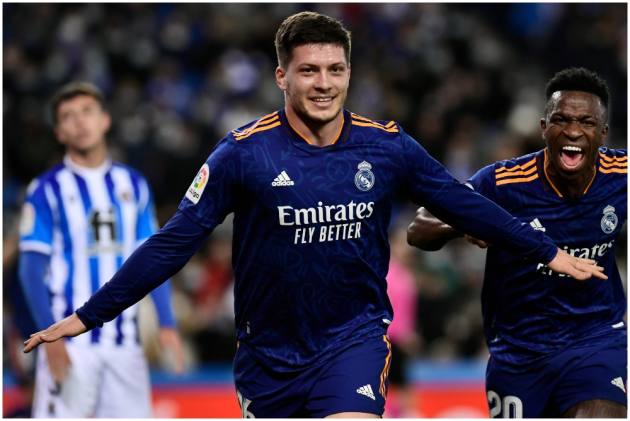 When Karim Benzema went down injured, Vinícius Júnior and the rarely used Luka Jovic stepped up to secure Real Madrid a 2-0 win at Real Sociedad and strengthen its hold of the La Liga lead on Saturday. (More Football News)

The young attacking players struck goals early in the second half in San Sebastián to give Madrid its eighth consecutive win across all competitions and leave it eight points clear of nearest chaser Sevilla.

Madrid’s victory came after Atlético Madrid and Barcelona were upset at home, leaving them further adrift.

“We knew that this was going to be a tough game at a difficult ground, but we played a great game from the very start,” Madrid midfielder leader Luka Modric said. “It was a complete game and these are three huge points.”

Atletico Madrid trailed by 10 points in fourth place after the defending champion was stunned by Mallorca 2-1 in the capital. Barcelona was a whopping 16 points behind in seventh place following a 1-0 loss to Real Betis, its first defeat since Xavi Hernández took over as coach.

Manuel Pellegrini’s Betis rose into third place, right behind crosstown rival Sevilla, which beat Villarreal 1-0 thanks to a goal from Lucas Ocampos.

Jovic never found his spot on Madrid following his 60 million euros transfer from Eintracht Frankfurt in the summer of 2019. He scored two goals in a season-and-a-half before he was loaned back to Frankfurt. Since his return in this campaign, he had tallied only just over 100 minutes as a sparsely used substitute, scoring zero goals.

But when Benzema gingerly walked off the pitch while grimacing in pain in the 17th minute, coach Carlo Ancelotti looked past Eden Hazard and Isco Alarcon and instead picked Jovic to take his place.

The Serbia striker proved key to Real Madrid taming the high-pace attack of Sociedad in the 48th. After Vinícius passed to him in the box, Jovic quickly returned the ball for Vinícius to fire in his 10th goal, second in the league to Benzema’s 12.

Jovic headed in his third goal for Madrid to secure the points in the 58th when he slid into position to push in a headed pass by Casemiro knocked on from a corner kick. “I can’t ask Vinícius to do anything more,” Ancelotti said. “(But) I want to underscore what Jovic did. He played very well, gave an assist and was very sharp in the goal he scored.”

Sociedad, which was without playmakers David Silva and Mikel Merino, fell to fifth place after its first home loss. Benzema’s injury came before Madrid hosts Inter Milan on Tuesday to decide which wins their UEFA Champions League group. Madrid will then play Atlético next weekend.

The high point of the day for Barcelona’s fans came before kickoff when Barcelona player Alexia Putellas presented to the 65,000-plus fans her Ballón d’Or for the world’s best women’s player.

Otherwise, it was more frustration. Juanmi Jimenez finished off a well-orchestrated counterattack to take Betis’ winner with 11 minutes to play. Barcelona had won twice and drawn once since Xavi replaced Ronald Koeman.

Betis’ goal came just when Barcelona was playing at its best after Ousmane Dembelé went on as a substitute for the final half-hour. Three times Dembelé shot just by the post before Betis caught Barcelona on a three-versus-two breakaway. 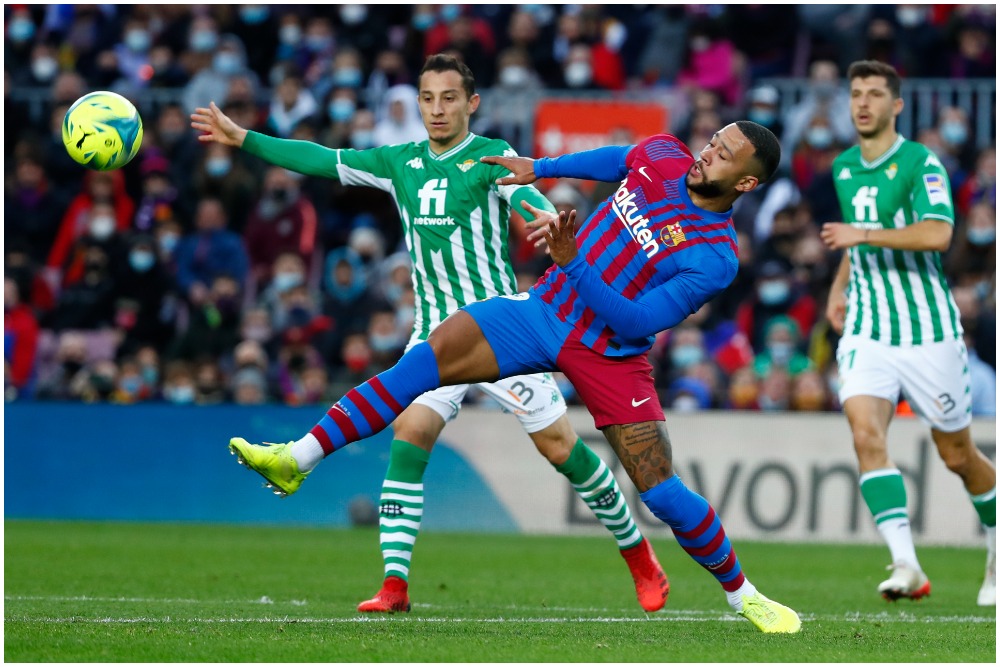 Sergio Canales coolly drew in Barcelona’s last two defenders and passed for Cristian Tello, who fed the now unmarked Juanmi to slot the ball past Marc-Andre ter Stegen. “We have to stop those counterattacks,” Xavi said. “We had practiced just that, about when you have to make a tactical foul.”

Barcelona lost teen talent, Gavi Páez, in the first half following the powerful impact of a ball to his head. The club said Gavi was released from the hospital after an examination.

Barcelona visits Bayern Munich on Wednesday needing a win to ensure its place in the Champions League round of 16. Bayern, which is already qualified as the group winner, beat Barcelona 3-0 in their first meeting this season.

If it loses, Barcelona would need Benfica to not beat Dynamo Kyiv to avoid elimination.

Atlético striker Cunha broke through for the defending champion in the 68th, only for Franco Russo to head Mallorca level in the 80th.

Atlético fell into the same trap that doomed Barcelona, pushing too many players forward in search of the winner. Take Kubo struck Mallorca’s second goal in injury time after Ángel Rodríguez launched him on a solo run from near the center line with a pass behind Atlético’s defense.

Diego Simeone’s side must win at Porto and hope AC Milan doesn’t beat group winner Liverpool on Tuesday to reach the Champions League’s knockout rounds. Sevilla and Villareal also have key Champions League matches this week. Sevilla must win at Salzburg to move on, while Villarreal plays Atalanta needing a draw to advance.