Sevilla's 1-0 win over Cadiz reduced the margin at the La Liga 2021-22 top to five points. Sevilla are currently having 41 points and have also played a match less than table-toppers Real Madrid. 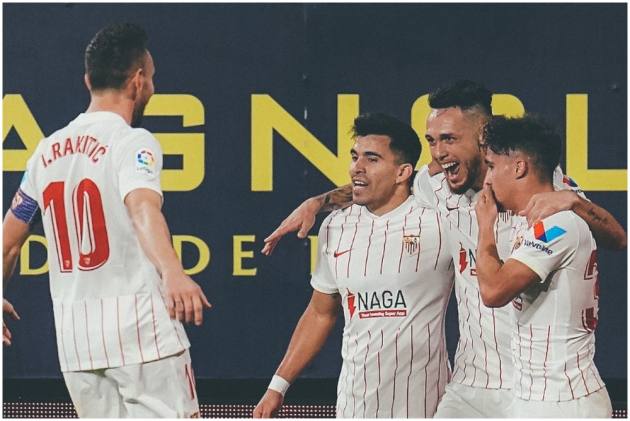 Sevilla cut into Real Madrid’s lead of the La Liga 2021-22 after winning at Cadiz 1-0, while Oihan Sancet scored a hat-trick for Athletic Bilbao. Lucas Ocampos' second-half goal helped pull Sevilla to within five points of the front-runner. Sevilla also has one more game to play than Madrid. (More Football News)

Madrid gave Sevilla the chance to tighten the title race after Carlo Ancelotti's side lost at Getafe on Sunday, a defeat that ended an unbeaten run of 15 games across all competitions. Joan Jordán hit the post early for Sevilla, which was missing several players.

Sevilla were without seven players, which the club did not identify, due to COVID-19 infections. Defender Jules Kounde was also suspended, while Suso Fernández, Erik Lamela and Jesús Navas were recovering from injury.

Ocampos broke through Cádiz's tightly packed defense in the 58th minute. Ivan Romero controlled a loose ball in the area, slipped a pass to Ivan Rakitic, who used one touch to find Ocampos to score from an angle. “Considering all the players we were missing, we are happy,” Ocampos said.

He dedicated his goal to his wife who was self-isolating after testing positive for COVD-19. Sevilla opened up an eight-point gap over Real Betis in third place. Atlético Madrid is another point back in fourth, followed by Barcelona trailing by one more point. Cádiz are in second-to-last place.

Bilbao may have found the solution to its troubles finishing off its scoring chances. Sancet, an attacking midfielder, netted three times to lead a 3-1 victory at Osasuna. His treble came after he scored his first goal of the season in the last round in a 2-1 loss to Real Madrid.

Villarreal demolished last-placed Levante 5-0 thanks to Gerard Moreno's brace. Villarreal, which struggled earlier in the season, has won six straight across all competitions. Levante remained winless in all 19 league games, and eight points from safety.