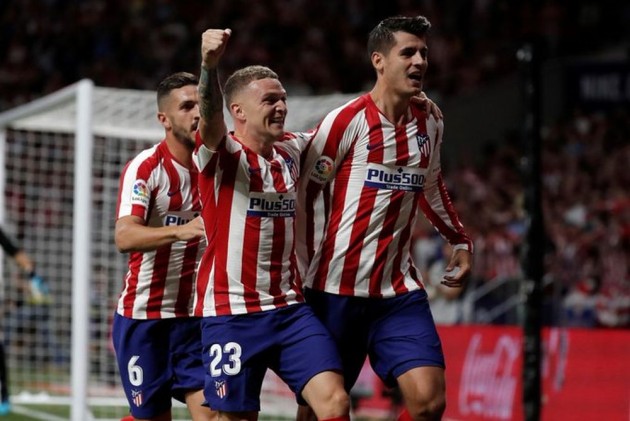 Alvaro Morata's first-half goal earned Atletico Madrid a 1-0 win over Getafe as they made a victorious start to the new La Liga season. (FOOTBALL NEWS)

Morata converted a cross from new signing Kieran Trippier, who impressed on his debut, 23 minutes into the first half at the Wanda Metropolitano.

Getafe's Jorge Molina and Atletico's Renan Lodi were both sent off in quick succession as events took a dramatic turn before half-time.

Morata spurned the opportunity to claim a second when he saw a penalty saved in the second half after fine work from Joao Felix, who caught the eye before being substituted after an awkward fall in the 66th minute.

But Atletico held on to a hard-fought victory regardless.

It was a close-season of change at Atletico with the departure of Antoine Griezmann to Barcelona and an influx of new arrivals including €126million Joao Felix and England international Trippier.

The former Tottenham defender claimed his first assist, delivering a pinpoint cross from the right which was powerfully headed home by Morata.

It was no more than the home side deserved after a dominant start and they were dealt a further boost when Molina saw his initial yellow card switched to red following a VAR consultation after he caught Thomas Partey's heel with his studs.

Yet, in a dramatic end to the half, Atletico were also reduced to 10 men after Lodi, making his debut, received two yellow cards in quick succession, his second for appearing to catch Damian Suarez's face in an aerial duel.

After the break, a sensational run from Joao Felix ended with him being poleaxed for a penalty in the 56th minute, only for Morata to see his spot kick saved superbly by David Soria.

Joao Felix was soon replaced by fellow new signing Marcos Llorente after receiving medical attention and Diego Simeone's side managed to cling on to the three points despite Angel Rodriguez hitting the crossbar from long-range late on.