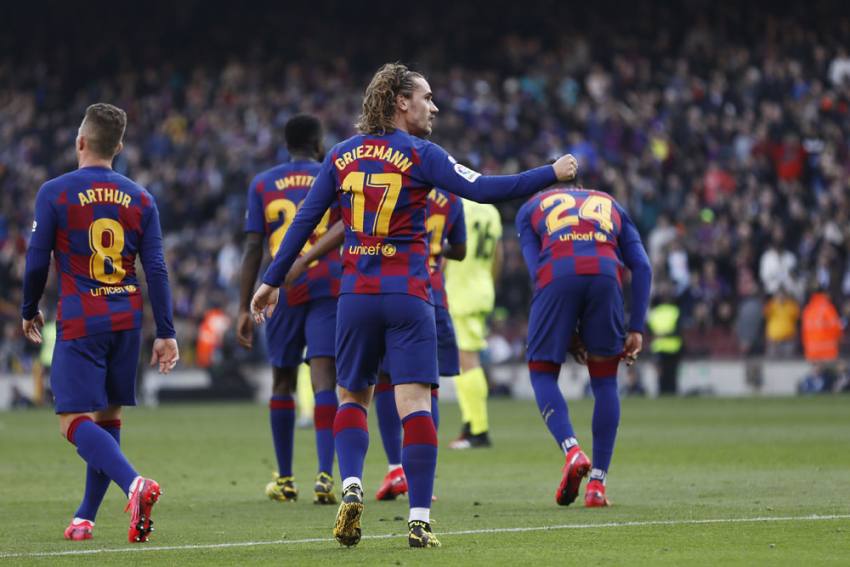 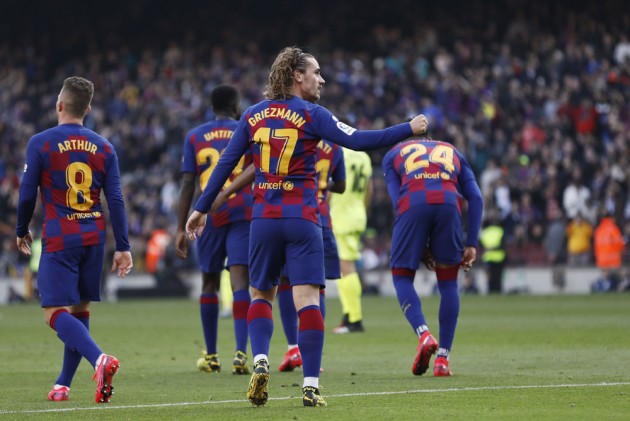 Needing a win to put themselves level on points with table-toppers Real Madrid, Quique Setien's side started sluggishly on Saturday and would have gone behind if not for VAR.

Barca made their good fortune count, though, Lionel Messi - on his 350th official appearance at Camp Nou - setting up Griezmann to open the scoring in the 33rd minute.

Sergi Roberto doubled Barca's tally before half-time, but Barca-linked Angel Rodriguez set up a grandstand finish, with Marc-Andre ter Stegen just managing to deny Getafe an equaliser as the champions held on.

Jordi Alba succumbed to a right adductor injury in the 22nd minute, with Junior Firpo introduced, and things looked to have got worse for the hosts when Allan Nyom tucked home from a corner, only for the goal to be ruled out by VAR for a foul on Samuel Umtiti.

Marc Cucurella was inches away from putting his parent club behind moments later, yet it was Barca who broke the deadlock when Messi fed a wonderful, disguised pass through to Griezmann, who finished with a sublime flick over David Soria.

It was 2-0 six minutes later - Roberto sending a first-time finish into the bottom-right corner at the culmination of a slick move, and only a fine save from Soria prevented Messi adding a third before half-time.

Angel was brought on shortly after the restart and the change had the desired impact when he volleyed in from the edge of the box.

Ter Stegen denied Jaime Mata a tap-in with 18 minutes remaining and, though Griezmann squandered two great chances, Barca ultimately made their goalkeeper's save count as they claimed the points.

What does it mean? All level at the top

With Madrid not in action until Sunday, Barca are - temporarily at least - level on points with Los Blancos at the top. The rivals go head-to-head at the start of March, in what looks set to be a pivotal clash in the title race.

Barca seem set to be given dispensation to sign a forward due to the season-ending injury suffered by Ousmane Dembele and Angel is one of the players reportedly high on their list.

If he is indeed to wind up as a Barca player in the coming weeks, the 32-year-old did his chances no harm with an exquisite finish - his 10th league goal of the season.

It has been an injury hit campaign for Barca full-back Alba and his frustrations continued when he hobbled off midway through the first half and he could well now be a doubt for the Champions League encounter with Napoli on February 25, as well as a crucial Clasico on March 1.

Barca are at home again in their next league fixture, against Eibar, while Getafe face Ajax in the Europa League on Thursday.