Barcelona needed a 90th-minute equaliser from Ronald Araujo to save the blushes. The draw left Barcelona in seventh place in La Liga. 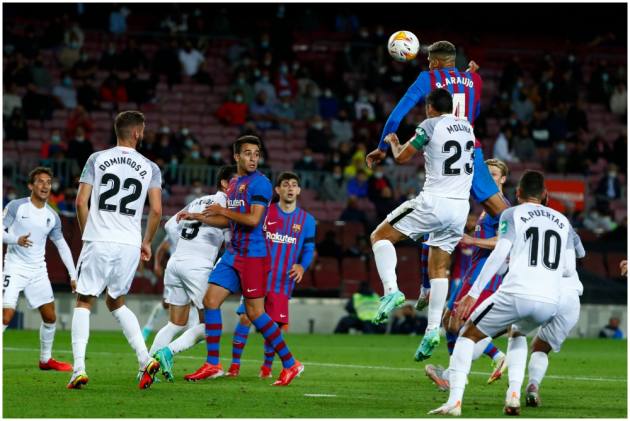 Less than a week after a demoralizing loss to Bayern Munich in the Champions League, Barcelona faltered at Camp Nou again, being held by winless Granada 1-1 in La Liga on Monday. Barcelona needed a 90th-minute equalizer by defender Ronald Araujo, sparking jeers by many in the crowd of nearly 27,000. (More Football News)

The setback followed the 3-0 rout by Bayern Munich in the team’s first defeat since losing Lionel Messi to Paris Saint-Germain and added pressure on coach Ronald Koeman and club president Joan Laporta.

Granada came to Barcelona winless in four matches and coming off two consecutive losses, including at home against Real Betis in the Andalucia derby last week. It defeated Barcelona at Camp Nou the last time they met in April.

“It’s a shame,” Araújo said. “If we had been able to score earlier we could have gotten the victory. After the early goal, they sat back on defense and that made it difficult for us.” The draw left Barcelona in seventh place, five points from leader Real Madrid with a game in hand.

Coached by former Spain manager Robert Moreno, Granada opened the scoring two minutes into the match with a header by Domingos Duarte off a set piece. Barcelona squandered two great chances to equalize before halftime — Sergi Roberto hit the crossbar from inside the area and Araujo’s header was brilliantly saved by Granada goalkeeper Luis Maximiano.

Memphis Depay and Luuk de Jong also failed to capitalize on scoring chances in the second half, but Araújo finally broke through with a close-range header in the 90th.

“We know that Barça isn’t going through a good moment and it was important to try to take advantage of that early on,” Duarte said. “Earning a point at Camp Nou is always good but we came close to getting the three points. In the end they had many chances too. It was a fair result.”

Koeman couldn’t count on several players because of injuries, including Jordi Alba and Pedri Gonzalez. He added a few youngsters in the second half, including Riqui Puig and 17-year-old Gavi, who set up Araújo’s equalizer. Philippe Coutinho was one of the players replaced.

Veteran defender Gerard Pique played as a striker after coming into the game in the final minutes.