Real Madrid drew level on points with Atletico Madrid at the top of LaLiga after beating Granada 2-0 to claim their sixth straight win. 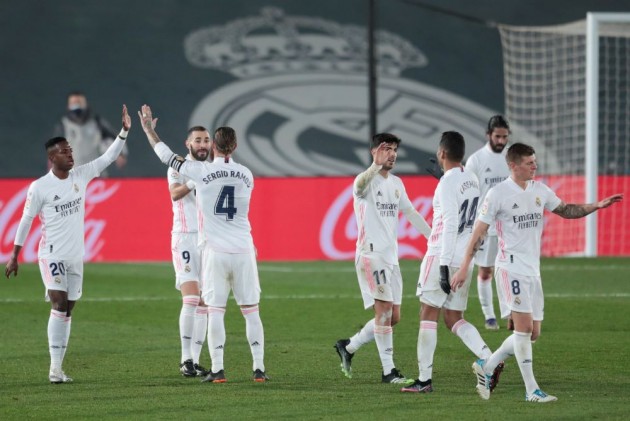 Zinedine Zidane's men have lifted the gloom that hung over the club during a torrid run of results in November and they ensured their fans a merry Christmas with a hard-fought win over a dangerous Granada side.

Madrid survived a number of early scares as Granada attempted to extend their three-game unbeaten LaLiga streak but improved dramatically after half-time, when Casemiro broke the deadlock with a fine header – the first time he has scored in three successive home games in Spain's top flight.

Antonio Puertas squandered a chance to give Granada the lead in the opening minute, firing high and wide following Raphael Varane's error

Karim Benzema hit the side netting at the other end, but Thibaut Courtois' fumble almost gifted Kennedy an easy finish, only for the winger to hesitate and hit tamely into the goalkeeper's arms.

A difficult first half for the champions was capped off in the 35th minute – Rodrygo Goes having to be taken off on a stretcher after pulling up through injury.

Madrid laid siege to the Granada goal early in the second half, Marco Asensio hitting the post before Toni Kroos and Federico Valverde drew good saves from Rui Silva.

Yet the breakthrough came 12 minutes into the half when Asensio delivered a floated cross which Casemiro powered into the bottom corner of Silva's net.

Lucas Vasquez curled a 25-yard shot narrowly over the crossbar before Madrid endured some late Granada pressure, but Benzema capped off the result in the last minute when he broke down the right, cut onto his left foot, and dragged a 20-yard shot into the far corner.

What does it mean? All-Madrid title tussle on the cards?

Madrid's tumultuous form earlier in the season looked set to hand Atletico a clear run at the title but Zidane has inspired a resurgence that could lead to an intense cross-city race for LaLiga, with Barcelona adrift in fifth place.

Kroos also registered two attempts, one of which forced Silva into a smart stop.

Granada coach Diego Martinez hooked striker Roberto Soldado 16 minutes from time, by which point the veteran campaigner had failed to muster a single shot on goal despite some sloppy defending from the hosts.

- Madrid have won their last 11 LaLiga games against Granada, scoring 3.3 goals per game on average. It is their longest winning run against a single opponent, among the LaLiga 2020/21 teams.
- Los Blancos have now scored 6,201 times in LaLiga. Only Barcelona, with 6,203 to their name, have previously reached this figure.
- Kroos has played his 200th match for Madrid in LaLiga, with 190 of them as a starter. Uli Stielike was the only German to have played more matches for Los Blancos in this competition (215).
- Benzema has scored 13 goals in 15 matches against Granada in LaLiga, his favourite opponent in the competition (level with Athletic Bilbao).
- With his assist against Granada, Asensio has finished a run of 19 games without scoring or providing both in all competitions.