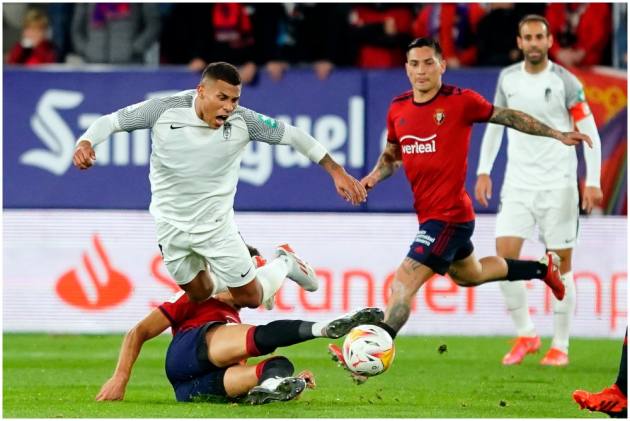 A stunning 90th-minute goal from far outside the area by Granada substitute Angel Montoro denied 10-man Osasuna the chance to move to the top of the La Liga. (More Football News)

Montoro’s long-range lob over the head of goalkeeper Sergio Herrera snatched a 1-1 draw for a Granada side that had been outplayed at El Sadar Stadium despite having an extra man for 15 minutes.

Osasuna was poised to pull level on points with league leader Real Sociedad, but Montoro's strike from deep denied the hosts a fourth consecutive victory.

Still, the Pamplona-based side has defied expectations by heading into the weekend in second place, one point above powerhouses Real Madrid, Sevilla and Atlético Madrid.

“We had worked really hard and it would have been great to win tonight,” said Osasuna coach Jagoba Arrasate. “We were defending really well with 10, but Montoro's brilliant strike robbed us a victory.”

Argentine forward Chimy Ávila put Osasuna ahead just before halftime when he pounced on a rebound of a strike by Cote Valdés and beat goalie Luis Maximiano from close.

Osasuna's defense remained in control even after Valdés was shown a direct red in the 75th for fouling Granada's Luis Suárez on the break with only the goalkeeper to beat.

But seeing that his side needed a bit of the audacious to even threaten Osasuna's goal, Montoro did not hesitate to shoot from midfield when Herrera gave him a chance.

“I saw that (Herrera) was off his line and daring me to give it a go. Fortunately, it went in and gave my team a point,” Montoro said.