Sevilla continued their good start under Julen Lopetegui with a 1-0 win over Alaves in La Liga. Joan Jordan scored the winner in the 37th minute. 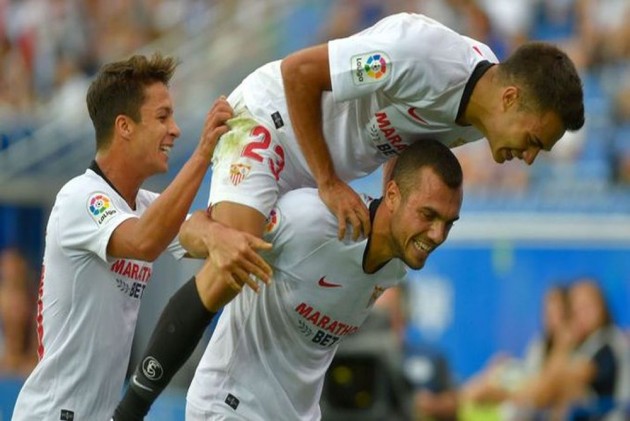 Sevilla moved to the top of the early La Liga table on Sunday (September 15) as Joan Jordan's brilliant free-kick helped them seal a 1-0 win at Alaves. (FOOTBALL NEWS)

Julen Lopetegui's side continued their excellent start to the campaign, remaining unbeaten and moving a point clear of Atletico Madrid, who lost 2-0 at Real Sociedad on Saturday, at the summit.

Sevilla host Real Madrid next Sunday in a meeting of two sides yet to taste defeat.

"That means nothing (being top)," said Sevilla coach Lopetegui, whose team next face a marathon trip to Baku to play Qarabag in their Europa League opener on Thursday.

"The only thing that (being top) tells me is that the team is doing things well. We have to keep improving before going to Baku, where they will make it very difficult for us."

It was a first defeat of the season for Alaves, who slipped to 11th in the standings.
Lopetegui, who joined Sevilla for his first job since being sacked in quick succession by both Spain and Real Madrid, saw one of his close-season signings produce the game's defining moment.

Midfielder Jordan, who arrived at Sevilla from Eibar for a reported 14 million euros ($15.62 million), curled home a wonderful free-kick in the 37th minute which flew into the top corner to give him his second goal of the season.

The visitors comfortably saw out the match to claim their third league win this term, as Alaves failed to muster a shot on target.

Elsewhere on Sunday, Robert Ibanez's 81st-minute equaliser kept Osasuna unbeaten after a 1-1 draw at Valladolid, while Granada moved up to seventh with a 2-0 success at nine-man Celta Vigo and Espanyol won at Eibar.

Real Betis claimed a 1-1 draw with fellow strugglers Getafe despite also being reduced to nine men, as 38-year-old club stalwart Joaquin netted a 73rd-minute penalty at the Estadio Benito Villamarin.

Real claimed a 3-2 win over Levante at the Santiago Bernabeu on Saturday, when reigning champions Barcelona eased to a 5-2 victory against Valencia, with 16-year-old Ansu Fati scoring inside two minutes.