Karim Benzema scored a penalty and set up two more goals as Real Madrid moved within a point of La Liga leaders Barcelona with a 5-0 home victory against struggling Leganes on Wednesday. 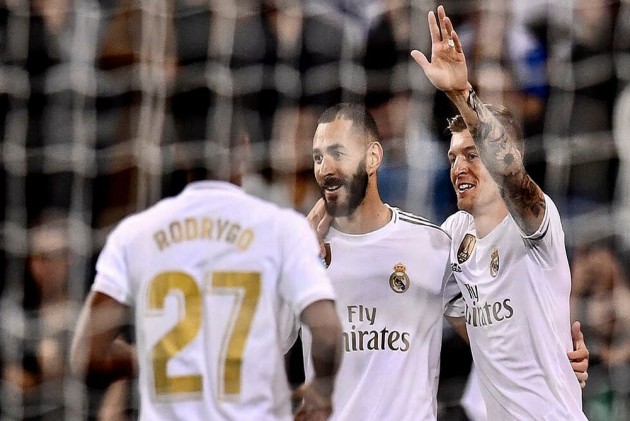 Karim Benzema had a hand in three goals as he inspired Real Madrid to a 5-0 win over Leganes in La Liga on Wednesday (October 30). (FOOTBALL NEWS)

With last weekend's scheduled Clasico against Barcelona postponed due to political tension in Catalonia, Madrid appeared to have fun on their return to action as they toyed with rock-bottom Leganes, who had no answer to the classy Benzema at the Santiago Bernabeu.

The Frenchman was central to a brutal Madrid start that saw them lead 2-0 within eight minutes – Benzema setting up Rodrygo Goes and Toni Kroos, before Sergio Ramos got in on the act from the spot.

Benzema eventually got a deserved goal of his own from 12 yards, taking him to seven for the season, and Luka Jovic finally got his first goal for the club in stoppage time as Los Blancos moved up to second – behind Barcelona – in the table.

Madrid looked in the mood right from the start and quickly charged into their two-goal lead, as Benzema teed up Rodrygo for a straightforward finish, before Kroos' deft flick from the striker's low cross left Juan Soriano with no chance.

Ramos increased the deficit in the 24th minute with a penalty, though he needed two opportunities as Soriano – who conceded the spot-kick for fouling Eden Hazard – was penalised via VAR for coming off his line when saving the Madrid captain's first attempt.

Benzema went agonisingly close to a fine goal just past the hour when his 25-yard strike came back off Soriano's left-hand post.

But Soriano had no such luck soon after when Benzema slammed home a cool penalty, won by Luka Modric after a clumsy tackle by Kenneth Omeruo.

Jovic wrapped up an emphatic victory late on, meeting Dani Carvajal's cross with a fine header to get off the mark for Madrid in his 10th outing.