Lionel Messi was substituted at half-time on his first La Liga start of the season as Barcelona claimed a 2-1 victory over Villarreal. 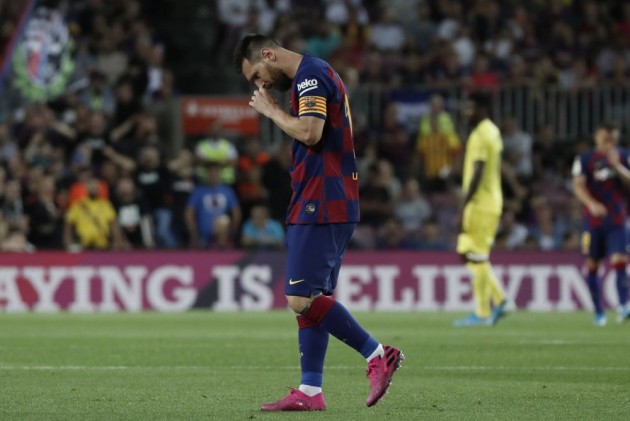 After a modest start to the campaign Valverde's position had come under increasing scrutiny, yet goals from Antoine Griezmann and Arthur secured three welcome points on Tuesday (September 24).

Villarreal midfielder Santi Cazorla pulled a goal back before the break, but Barcelona's defence stood firm in the second half.

Finally able to make his 400th La Liga start following a calf problem, Messi pulled up with a muscle injury just before the half-hour mark and despite returning to the field following treatment, he was replaced by Ousmane Dembele at the interval.

The Argentina forward, who picked up The Best FIFA Men's Player award in Milan on Monday, had been instrumental in his team's sixth-minute opener at Camp Nou.

Messi's cross following a corner picked out Griezmann and the France international headed in from a tight angle.

Barcelona added a second goal in the 15th minute with a thunderous strike from Arthur. Villarreal goalkeeper Sergio Asenjo could only stand and watch as the Brazil midfielder, afforded space and time, struck a powerful long-range shot into the top of the net.

The visitors pulled a goal back in equally spectacular fashion just before the break, though, when a slick passing move culminated with a fierce drive from Cazorla which flew beyond Marc-Andre ter Stegen.

Barcelona enjoyed the bulk of possession after the break and had a shout for a penalty when 16-year-old substitute Ansu Fati went to ground, though a VAR check backed up the referee's decision.