Six teams are tied at the top of the standings after three rounds — Madrid, Sevilla, Valencia, Barcelona, Atlético and Mallorca 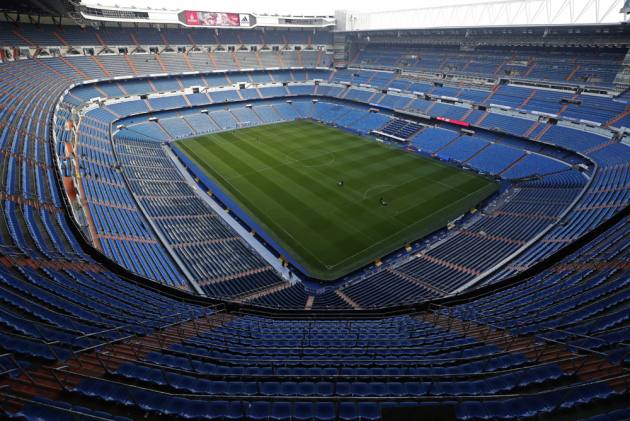 Madrid will get to play at its venue when it hosts Celta Vigo in the Spanish league on Sunday, 560 days after it last hosted a match at the stadium.

The Bernabéu's massive renovation project is far from over but it will reopen to a limited crowd when the league returns from the international break.

It will be the first match at the venue since before the pandemic on March 1, 2020, when Madrid defeated Barcelona 2-0 with Zinedine Zidane as coach.

Madrid president Florentino Pérez said, “Soccer is returning to the Santiago Bernabéu. It’s very exciting to be able to say this after everything we have been through during these sad and strange times."

Madrid took advantage of the prohibition on spectators in stadiums because of the pandemic to accelerate the construction work at the Bernabéu while it played its home matches at the small Alfredo Di Stéfano Stadium in the club’s training complex.

It played three straight away matches in the first three rounds this season to get the venue ready for crowds again.

Authorities are allowing clubs to fill 60% of their venues’ capacities, which would mean nearly 50,000 fans at the Bernabéu, but only several thousand people are expected on Sunday. Not all seating areas will be available until the renovation concludes, and Madid has yet to say the exact number of tickets it put on sale.

The Bernabéu is not expected to be fully finished until the end of 2022. Construction work is visible outside and inside the venue, which will get a retractable roof and a state-of-the-art video board.

On the field, Madrid resumes its league campaign without Kylian Mbappé despite a reported offer of more than 200 million euros ($236 million) to Paris Saint-Germain at the end of the transfer window. Madrid’s only addition was young midfielder Eduardo Camavinga, a France teammate of Mbappé.

Madrid city rival Atlético Madrid, the defending league champion, boosted its squad ahead of its match at promoted Espanyol on Sunday by bringing back Antoine Griezmann on a loan from Barcelona.

"I had been waiting for this moment. I will give it my all in every match to repay the effort the team made for me to be able to return. I wanted to be back no matter what. It’s the best place for me. It's where I can be happy on and off the pitch.”

Barcelona — already without Lionel Messi — brought in striker Luuk de Jong from Sevilla to help make up for Griezmann’s departure. The Catalan club made more salary cap room available by selling youngster Illaix Moriba to Leipzig and sending defender Emerson to Tottenham on a loan.

Barcelona won’t play this weekend as its match at Sevilla was postponed to give rest time to players on international duty with South American nations. The game between Villarreal and Alavés also was postponed. Madrid’s match against Celta was moved from Saturday to Sunday for the same reason.

Only two games will be played on Saturday: Levante vs. Rayo Vallecano and Athletic Bilbao vs. Mallorca.

The postponements came only after Spain's top sports authority ruled in favor of the league's request to the soccer federation, which initially denied them.

Six teams are tied at the top of the standings after three rounds — Madrid, Sevilla, Valencia, Barcelona, Atlético and Mallorca.