A visit from Valencia on Sunday kicks off a three-game home stint that the Barcelona coach Ronald Koeman said must mark a turnaround for his beleaguered team. 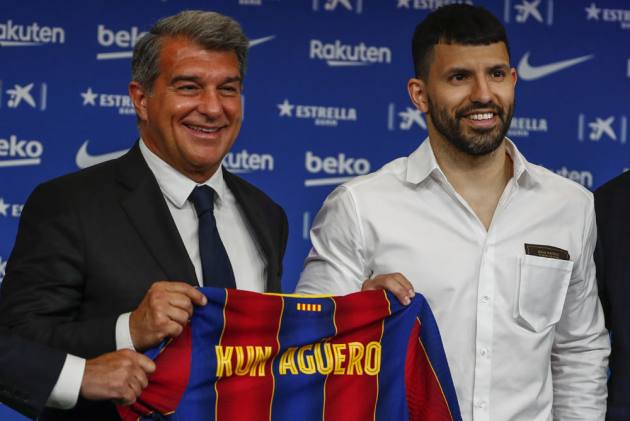 Ronald Koeman got a reprieve. Now he needs to make it last. (More Football News)

A visit from Valencia on Sunday kicks off a three-game home stint that the Barcelona coach said must mark a turnaround for his beleaguered team.

After facing Valencia, Barcelona will host Dynamo Kyiv and Real Madrid within a week.

The run of games at Camp Nou comes after an international break that gave Koeman a chance to regroup following a tumultuous period for a team struggling to win without Lionel Messi.

Two weeks ago, Koeman's job was considered in serious jeopardy after Barcelona had lost both of its Champions League games by an identical 3-0 score. Barcelona headed to the Spanish capital to play Atlético Madrid amid widespread reports that the club leadership was scouting for a replacement for its coach.

However, instead of firing him, club president Joan Laporta ended days of silence by reaffirming Koeman as coach, asking fans to be patient as the club tries to repair its hard-hit finances that have made it difficult to retain its top stars.

The public backing of Koeman came hours before another painful loss: a 2-0 defeat at Atlético that left Barcelona with only three wins in seven Spanish league games this season.

Koeman has pleaded for more time so he can get back injured players to help an attack that is struggling to produce goals without Messi and Antoine Griezmann.

Agüero appears ready to make his debut for Barcelona since leaving Manchester City this offseason as a free agent. He had been sidelined with a right thigh problem until he played a friendly with Barcelona on Wednesday.

But Koeman also acknowledged that any Barcelona coach must produce results and pointed to this week's tripleheader as key.

Next weekend's match against Madrid will certainly be critical for Koeman, whose team lost both “clásicos” last season. But before that, his team faces a must-win game against Dynamo on Wednesday. Barcelona is last in its Champions League group and at risk of failing to reach the knockout rounds for the first time in two decades.

Valencia should also offer a difficult test. The team that had struggled to find its identity ever since the exit of coach Marcelino García in 2019 has only lost twice in eight games under José Bordalás. Bordalás earned a reputation as a defensive mastermind at Getafe, where he forged a competitive team despite its limited individual talents.

Barcelona enters the match in ninth place, albeit with a game in hand, right behind Valencia in eighth.

Laporta will also face an important hurdle on Sunday when his board will submit its budget, and its plan to seek financing for a remodeling of Camp Nou, to a vote by delegates of the member-owned club.

Real Madrid and defending champion Atlético Madrid both had their matches scheduled for this weekend postponed to give players on international duty with South American nations more rest time.

Madrid's game against Athletic Bilbao and Atlético's match against Granada will be played at dates to be determined.

The postponed matches give Real Sociedad the chance to take the league lead with a draw or win against Mallorca. The team from San Sebastián is in third place, level on points with leader Madrid and second-place Atlético.

A visit from Valencia on Sunday kicks off a three-game home stint that the Barcelona coach said must mark a turnaround for his beleaguered team.