New Barcelona recruit Sergio Aguero had to be substituted in the 41st minute against Alaves after he felt dizzy, extending the injury list. 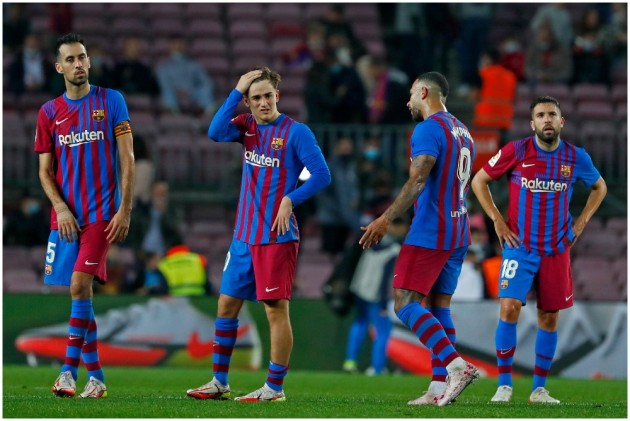 New coach, similar disappointment for Barcelona as they were held to a 1-1 draw at home by lowly Alaves in the debut of caretaker coach Sergi Barjuan, while Real Madrid and Sevilla both won on Saturday to leave the Catalan club even further behind in the La Liga. (More Football News)

Vinícius Júnior took over the scoring duties from Karim Benzema by netting twice in Madrid's 2-1 win at 10-man Elche. Madrid, Sevilla and Real Sociedad are at the top of the standings. Sociedad can reclaim the outright lead on Sunday at home against regional rival Athletic Bilbao.

Barcelona was left in ninth and eight points adrift after four wins in 10 games.

Barjuan, a former Barcelona player who until Thursday was its reserve team coach, did not waver from the lineup and 4-3-3 formation used by Ronald Koeman, who was fired this week after one too many defeats.

The outcome was again overwhelming possession for Barcelona with very little to show for it.
Memphis Depay gave Barcelona the lead with a wonderful strike from outside the area in the 49th minute, only for Luis Rioja to dribble through the center of the hosts' painfully passive defense and equalize three minutes later.

Rioja dribbled past three Barcelona players before a quick passing combination with Joselu Mato fooled Gerard Pique and left Rioja alone to round Marc-Andre ter Stegen and roll the ball home. Depay's shot off the post was the hosts' only clear chance for a winner.

The one bright spot for Barcelona was the play of teenage midfielders Gavi Páez and Nico González, who provided the only sparks in attack besides Depay. Barjuan also gave a debut to 19-year-old Abde Ezzalzouli in the final minutes.

But Barcelona's injury list likely grew after Pique limped off in the second half after Sergio Agüero had to leave after feeling dizzy, according to Barjuan.

The Argentine had to be substituted in the 41st after he motioned to the top of his chest and throat. After spending a minute stretched on the turf, he was able to walk off. The club said that Agüero was taken to the hospital for “cardiological tests” after being bothered by his chest.

Barcelona was already without Pedri González, Frenkie de Jong, Ansu Fati, Ousmane Dembelé, Ronald Araújo and Sergi Roberto due to injury. Only 37,000 fans turned out at the 99,000-seat Camp Nou.

The rainy day and the long weekend with Monday being a holiday dampened the turnout, as did the struggles of a team still missing Lionel Messi.