Barcelona could not recover from an awful Marc-Andre ter Stegen mistake as they lost at Atletico Madrid. 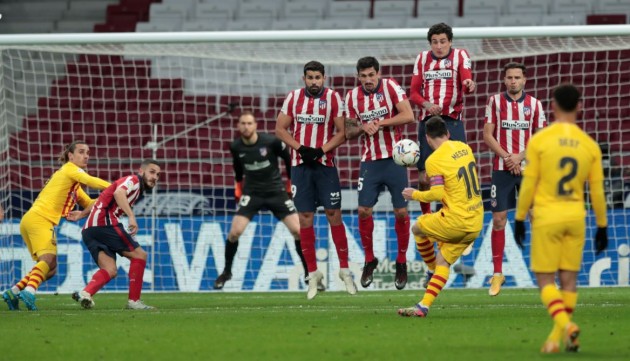 Ter Stegen – making just his third Blaugrana appearance in all competitions since returning from a knee injury – rashly set off in pursuit of the ball near the halfway line and was beaten by Carrasco, who kept his cool to find the net.

It was a setback Barca could not recover from as they succumbed to a third league defeat of the season to remain 10th, also losing Gerard Pique to a knee injury as Ronald Koeman's teething problems show no sign of easing.

The visitors had held their own in a lively start that saw Antoine Griezmann stab his volley just over before Ter Stegen dived away to his right to make a smart save from Saul Niguez's 20-yard drive.

Marcos Llorente came closest to an early breakthrough but blasted against the crossbar.

Jordi Alba interrupted a subsequent lull in proceedings with a sublime pass between Kieran Trippier's legs to send Lionel Messi through, yet he shot too close to Jan Oblak from a tight angle.

A nutmeg at the other end proved far more costly on the stroke of half-time, however, as Carrasco nudged the ball beyond Ter Stegen, who had inexplicably charged 40 yards from his goal to leave the Atletico winger with a straightforward finish into an empty net.

Clement Lenglet should have nodded Barca level 11 minutes after the restart but instead directed his header straight at a grateful Oblak and then saw centre-back partner Pique land awkwardly under a challenge, requiring assistance to depart down the tunnel.

And Diego Simeone's men subsequently came on strong again, pushing Barca back the other way to see out a precious victory.

What does it mean? Simeone's side the real contenders

For a little over 10 minutes, this was an open, exciting affair with chances at either end. But Atletico, masters of the scrappy win, slowed the pace of the game expertly and seized on a rare Ter Stegen error in clinical fashion.

Koeman needs some respite, but Simeone's side were never likely to relent, surely believing this strange year could be theirs. Atletico are second, level on points with leaders Real Sociedad, as Barca sit nine points off the pace already.

Had Messi taken his first-half chance from an exquisite Alba pass, the nutmeg on Trippier would have been replayed over and over again. As it was, the Atletico right-back recovered superbly to win the battle down that flank.

The England international was involved at both ends of the field. He sent in four crosses, two of them finding team-mates, and created one chance, while winning four of his six duels and making one tackle, three clearances and two interceptions.

Ter Stegen is a rival to Manuel Neuer at international level but has long been established as Barca's number one. Neither Germany goalkeeper will reflect fondly on this week, though, as the Blaugrana ace followed up his watching brief in the 6-0 defeat to Spain by enduring a nightmare of his own.

The former Borussia Monchengladbach man, like Neuer, can take risks at times with his sweeping style, and this was one occasion where he paid the price. Carrasco became the eighth player to dribble past Ter Stegen in his LaLiga career as he committed an error leading to a goal for the ninth time.

3 - @atletienglish have scored three goals in #LaLiga this season thanks to keepers' errors, more than any other side in the competition (Ter Stegen & Conan Ledesma x2). Pressure#AtleticoBarca #Atleti #FCBarcelona pic.twitter.com/ysgNGCyJNO

- Atletico Madrid beat Barcelona in LaLiga for the first time since February 2010 (2-1).

- Barcelona have just 11 points after eight LaLiga games this season (W3 D2 L3), their worst start at this stage since 1991-92, when they won the title.

- Atletico have just conceded two goals in eight LaLiga games this season (W6 D2 L0), their best start in terms of goals conceded at this stage since 1995-96, when they won the double of LaLiga and Copa del Rey.

- Atletico are unbeaten in their last 24 LaLiga games (W15 D9), their longest run without defeat in the competition and the longest current such streak across the top five European leagues.

Champions League action resumes in midweek with Atletico at home to Lokomotiv Moscow on Wednesday, the day after Barca visit Dynamo Kiev.