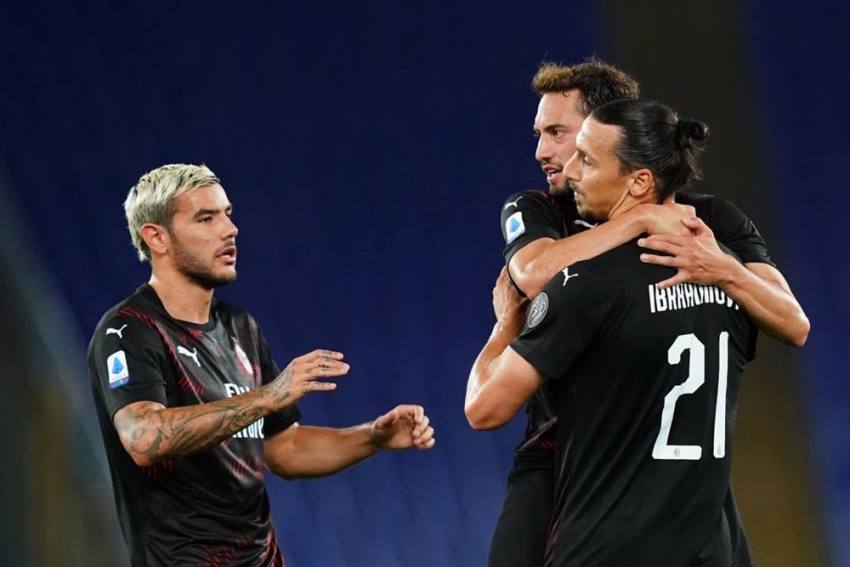 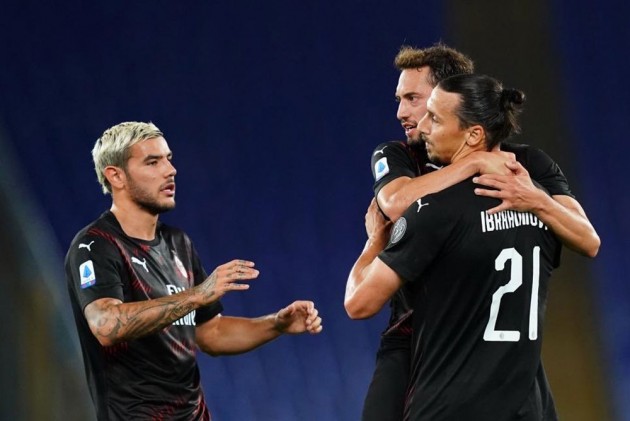 Juve moved seven points clear at the Serie A summit with a 4-1 win over rivals Torino earlier on Saturday and Lazio were unable to close the gap in their game in hand.

Lazio had not lost in 16 home games since May 2019 but were two down at half-time - Ibrahimovic scoring a penalty after setting up Hakan Calhanoglu for the opener.

Ante Rebic added a third for Europe-chasing Milan in the second half as Lazio, without leading goalscorer Ciro Immobile, fell to just a second loss in 25 league matches.

Calhanoglu continued his good form since the restart by opening the scoring after 23 minutes, the midfielder's strike deflecting off Marco Parolo to help it over Thomas Strakosha.

Ibrahimovic had a goal ruled out for offside but did not have to wait long to score from the penalty spot after Alexis Saelemaekers' cross struck Stefan Radu's hand.

Strakosha got a hand to the spot-kick 11 minutes before the break but it squirmed under his body to leave Lazio, who recovered from a goal down to beat Fiorentina in midweek, with a big mountain to climb.

Manuel Lazzari thought that he had started a second-half comeback when he drilled home, only for the offside flag to deny him, and further misery followed when Rebic added a third goal.

The Croatia international took Giacomo Bonaventura's pass in his stride just before the hour mark and swept past Strakosha for his ninth league goal of the season.

Milan should have added a fourth late on but Theo Hernandez missed a sitter, having earlier been denied by Strakosha following an impressive run.

What does it mean? Lazio's Scudetto hopes all but over

Lazio's slim Scudetto hopes are surely all over as this loss leaves them seven points adrift of leaders Juventus with eight games to go.

As for Milan, they now have 10 points from a possible 12 since the restart - the exception being a disappointing 2-2 draw with SPAL last time out - and are in sixth place.

Ibrahimovic now has two goals in two starts since recovering from an injury during the lockdown that many feared would bring a premature end to his career.

He may have got a bit of luck with the penalty - Strakosha really should have kept it out - but he made his presence felt and also teed up Calhanoglu's opener.

14 - Zlatan #Ibrahimovic has converted his last 14 Serie A #penalties; before tonight, the last was back in 2012 against Inter. Infallible. #LazioMilan. pic.twitter.com/pbkp8ZZ7tx

Lazio were without Immobile for the first time in Serie A this season, while fellow forward Felipe Caicedo was also suspended.

Joaquin Correa and Luis Alberto had nowhere the same impact, managing just one shot on target between them.

- Lazio have lost a Serie A match with a margin of 3+ goals for the first time since October 2018 against Inter.
- Milan have won a Serie A game at Stadio Olimpico against Lazio with a 3+ goals margin for the first time since February 2009, when Kaka, Alexandre Pato and Massimo Ambrosini were the scorers.
- Ibrahimovic and Real Betis star Joaquin are the only two players from the top-five European leagues who were born after 1/1/1981 and have scored at least four goals this season.
- Lazio have conceded a penalty in the last two Serie A games - they had conceded only three across the first 28 Serie A matches.
- Calhanoglu has been directly involved in four goals (2 goals, 2 assists) in his last four Serie A appearances, while Rebic has scored nine times in his last 11 top-flight outings.

Milan host league leaders Juventus on Tuesday, the same day that Lazio, who will hope Stefano Pioli's men can do them a favour, travel to relegation-threatened Lecce.