Champions League holders Bayern Munich have one foot in the quarter-finals after easing to a win against Lazio in their last-16 first leg. 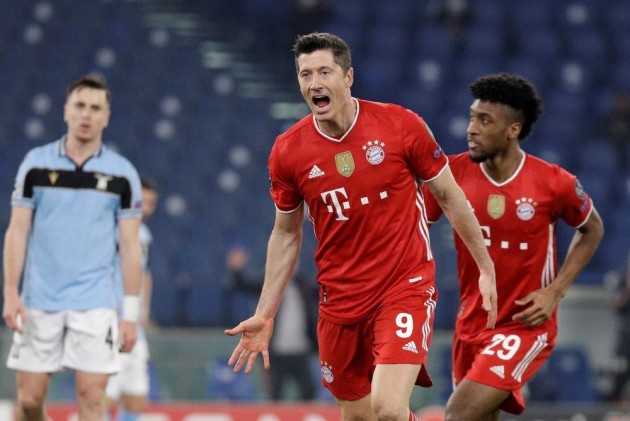 Bayern have stuttered domestically with a draw and defeat in their past two Bundesliga matches, but they eased to victory at the Stadio Olimpico, scoring three of their four goals in the first half.

Jamal Musiala and Leroy Sane put the holders in complete control after prolific striker Lewandowski had opened the scoring with his 72nd goal in the competition, moving him behind only Cristiano Ronaldo (134) and Lionel Messi (119).

Francesco Acerbi's own goal early in the second half gave Lazio an even bigger mountain to climb and, while Joaquin Correa did pull one back with a fine solo goal, Hansi Flick's men are in command ahead of the return tie in Bavaria on March 17.

The hosts, competing in the knockout stages of the competition for the first time in 21 years, gifted Bayern the lead inside nine minutes as Lewandowski pounced on Mateo Musacchio's underhit backpass and rounded Pepe Reina for a simple finish.

Sergej Milinkovic-Savic was unfortunate not then to win a Lazio penalty and Bayern were soon instead two up through Musiala's drilled effort from the edge of the box following a smart team move.

Lewandowski was denied by Reina's leg, but the world champions added a third after some more lax play from Lazio, Patric losing the ball to Kingsley Coman, who fired in a shot that Reina could only parry to Sane.

Simone Inzaghi's side were further behind 62 seconds after half-time as Acerbi turned Sane's cross into his own net inside the six-yard box under pressure from Alphonso Davies.

But Lazio extended the Champions League record for both scoring and conceding in consecutive matches to 13 thanks to Correa's calm finish past Manuel Neuer after slaloming through the opposition defence.

Correa was denied a quickfire second by a good Neuer save and Ciro Immobile was also thwarted by the Bayern goalkeeper, although Lazio's deficit did not increase as Reina produced another good stop to keep out Lewandowski 10 minutes from time.

What does it mean? Easy going for Bayern

Lazio had won eight of their 10 previous matches in all competitions heading into this contest, while Bayern have already lost more Bundesliga games in 2021 than in the whole of the previous calendar year, which pointed towards a tight contest.

That was the case for all of nine minutes, at which point Lewandowski scored his 32nd goal of the campaign to set Flick's charges on their way to a 17th win in 18 Champions League games since the start of last season and, barring an almighty collapse in the return leg, a place in the last eight.

Due to the absence of the likes of Muller, Douglas Costa and Serge Gnabry, Flick handed Musiala - aged 17 years and 363 days - just his second Champions League start.

He made a big impact with a crisp finish in the first half that made him the youngest Englishman to score in the competition and the second-youngest player to score in the knockout stages after Bojan.

Lazio their own worst enemies

Musacchio was not alone in having a bad game - Patric also gave the ball away in the lead up to Bayern's third - but Lazio did not recover from the early first goal for which the defender was to blame.

He gave away possession twice in total and lasted only 31 minutes before being taken off by Inzaghi as part of a tactical switch that did not work as he would have hoped.

- Lazio conceded four goals in a home European game for only the third time ever after 4-0 defeats against Barcelona (in the UEFA Cup in 1975) and Chelsea (in the Champions League in 2003.
- Bayern are now unbeaten in their past 18 Champions League games (W17 D1), the fourth-longest such run in the competition's history and the longest since a run of 25 for Manchester United ending in May 2009.
- Musiala (17y 363d) became just the second 17 year-old to start a Champions League knockout game for Bayern after David Alaba (17y 258d) in March 2010 against Fiorentina.
- Sane has been directly involved in 10 goals in his past 10 Champions League appearances (seven goals and three assists).
- Correa has scored three Champions League goals for Lazio this season (seven games), one more than he managed in his previous two campaigns in the competition for Sevilla combined (two in 11 games).

Lazio will look to bounce back from this loss when they travel to Bologna in their next Serie A game on Saturday, the same day that Bayern host Cologne in the Bundesliga.