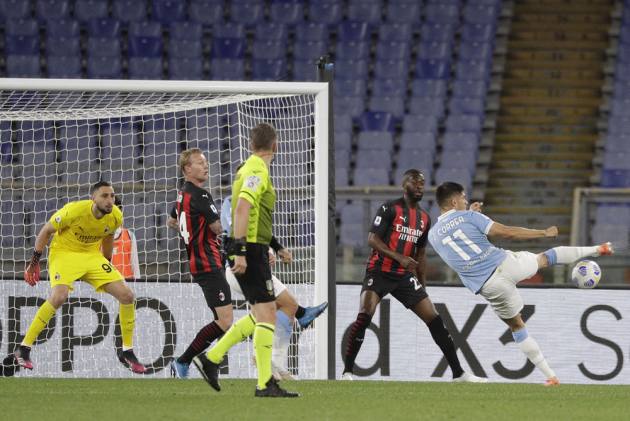 Joaquin Correa scored twice as Lazio enhanced their chances of qualifying for the Champions League and left Milan out of the top four with a 3-0 win at fortress Stadio Olimpico. (More Cricket News)

Correa scored after only 77 seconds and struck again in the second half to seal a deserved victory for Lazio in head coach Simone Inzaghi's first game back on the touchline since recovering from coronavirus.

The prolific Ciro Immobile rubbed salt into the wounds with a late third as Milan were toothless in defeat to Stefano Pioli's former club and slipped to fifth in the Serie A table, level on points with Napoli and Juventus.

Lazio are five points adrift of the Rossoneri, after securing a 10th successive home victory in the top flight, and they have a game in hand in what is shaping up to be a tense battle for Champions League qualification.

Hakan Calhanoglu could have got Milan off to a dream start but the Turkey playmaker's strike was palmed away by Pepe Reina.

It was the Biancocelesti who were in front in the second minute courtesy of a cool finish from Correa, who exchanged passes with Immobile before nonchalantly rounding Gianluigi Donnarumma and tapping into an empty net.

Manuel Lazzari thought he had doubled Lazio's lead late in the first half, but a VAR check showed he was marginally offside before Mario Mandzukic failed to beat Reina when he was presented with an opportunity just prior to the break.

Lazio had their second goal break six minutes into the second half, when Correa beat Fikayo Tomori before drilling into the roof of the net with his right foot and referee Daniele Orsato saw nothing untoward when he checked the pitchside monitor a potential foul on Calhanoglu.

3 - Lazio have won 10 consecutive Serie A matches at home for the third time in their history, after 1937 and 1974. Train.#SerieA #LazioMilan pic.twitter.com/f9yZO18eBB

Donnarumma produced a superb fingertip save to deny Correa a hat-trick as Milan struggled to live with Lazio's passing, movement and pace.

A deft Immobile lob came back off the post before the striker lashed home his 23rd goal of the season off the base of the post with a clinical right-foot finish three minutes from time.

Franck Kessie headed against the crossbar in the closing stages to cap a miserable night for Milan.

What does it mean? Lazio in the charge, Milan faltering

Milan looked like strong title contenders earlier in the season, but they could yet miss out on playing in Europe's premier club competition next season as their city rivals close in on the Scudetto.

The Rossoneri have suffered back-to-back defeats, having gone down 2-1 to Sassuolo last week, and must regroup with five games to play.

Pioli's side are only two points behind second-placed Atalanta, but Lazio are now very much in the mix following a run of six wins in seven matches.

Liverpool have been linked with a move for Correa and his price tag may have gone up after another livewire display.

The Argentine forward opened the scoring with a classy finish and clinically completed a double. Correa hit the target with three of his five shots, almost claiming the match ball.

It was not a good day for Milan strikers, with UEFA announcing before the game that Zlatan Ibrahimovic is being investigated for "an alleged financial interest in a betting company".

Mario Mandzukic was handed his first Serie A start for the club, with Ibrahimovic still absent due to injury, and the January signing was unable to grasp his chance. He was replaced Rafael Leao after 63 minutes, having failed to make an impact.

Key Opta facts
- Lazio have won 10 consecutive Serie A matches at home for the third time in their history, after doing so in 1937 and 1974.
- Correa's opener was Lazio's fastest in Serie A since Opta began collecting such data in 2004-05.
- Correa has scored 20 goals in Serie A with Lazio, 14 of those have been assisted by Immobile (eight) or Luis Alberto (six).
- Immobile has scored six goals in Serie A against Milan since he joined Lazio in 2016-17. He is now the player with the most goals against the Rossoneri in this period in the competition, overtaking Andrea Belotti, Mauro Icardi and Edin Dzeko.
- Immobile has hit post or bar six times this season, a joint-record in Serie A, while only Robert Lewandowski, Messi Lionel (both eight), Karim Benzema and Ollie Watkins (both seven) have done so more often in the top 5 European Leagues.
- Milan have conceded in all their past seven Serie A matches, their joint-worst run under Pioli.

Milan entertain Benevento on Saturday evening, with Lazio at home to Genoa the following day.