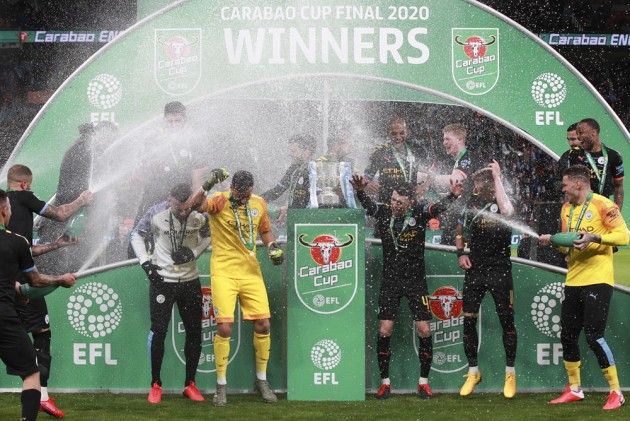 Manchester City won their fifth EFL Cup in the past seven seasons with a 2-1 victory over Aston Villa at Wembley on Sunday. (More Football News)

Sergio Aguero's goal got the defending champions up and running, with Rodri heading in a controversial second from a corner that should not have been given.

Mbwana Samatta's diving header got Villa back in the contest ahead of the break but City dominated the second half before surviving an almighty late scare.

Having been on the back foot, Villa came close to a last-gasp leveller as Bjorn Engels forced Claudio Bravo into a fine save, tipping his header onto the post as City won the trophy for a third year in a row.

This trophy formed part of a historic domestic treble in the last campaign and City's hopes of FA Cup success are still alive, even if their Premier League title defence has been left in tatters by a Liverpool side who suffered a shock loss to Watford on Saturday.

If City are to collect another hat-trick of trophies it will also require a maiden Champions League success, with Wednesday's stunning 2-1 win at Real Madrid raising hopes on that front.

It was eyebrows that were raised when Guardiola's team was announced, showing eight changes from that midweek starting line-up, with Kevin De Bruyne the headline name on the bench.

Villa, who have won the competition five times but not since 1996, made a bright start and Anwar El Ghazi headed narrowly over from Ahmed Elmohamady's delivery.

With City having won seven of the last eight matches against Villa, scoring nine goals in this season's two league fixtures, it was little surprise to see them grow into the contest and Aguero looped a header onto the roof of the net.

The breakthrough came after 20 minutes when Rodri picked out Phil Foden, who nodded into the path of Aguero to convert via a slight deflection off Tyrone Mings.

City won a corner 10 minutes later that should have been a goal-kick, the ball clearly having come off Ilkay Gundogan last, and from that set-piece – taken by the German – Rodri headed home.

Dean Smith's side showed tremendous character to reduce the deficit before the break, John Stones stumbling comically under a high ball as El Ghazi capitalised, his cross converted by Samatta.

Foden bounced a shot wide from the edge of the box early in the second half as City sought to snuff out any threat of a turnaround, with De Bruyne's introduction soon after another indication of their intent.

It became a game of attack versus defence, with Villa pinned back, and it took a stunning Orjan Nyland save to keep out Rodri's downward header.

Remarkably, Villa almost snatched a leveller, but Bravo produced a superb save to push Engels' attempt onto his right-hand upright in the dying moments.

What does it mean? Silverware lining for City

City have had a long time to get used to the idea the Premier League trophy will not reside at the Etihad Stadium next season, and so competitions like the EFL Cup – evidently not taken lightly by Guardiola – have taken on added importance.

This is yet another piece of silverware to add to his and the club's collection, which should provide a boost for a run-in that could yet yield two further prizes.

Villa, meanwhile, must quickly dust themselves down as they seek to secure their top-flight status.

Foden's first City goal came in this competition against Oxford United in 2018, his performance then earning rave reviews from Guardiola, who has used him relatively sparingly. But Foden's class was evident again in London, the English midfielder showcasing his exquisite first touch on numerous occasions, while also providing a headed assist for Aguero's opener.

Given City's dominance of the match, it might seem churlish to single out referee Lee Mason's role as being pivotal, but such a brazen mistake – the award of the corner which led to Rodri's goal – on such a big stage is hard to overlook. Besides, Stones' error was humiliating enough without also singling him out here...

City head to Sheffield Wednesday in the FA Cup on Wednesday, with the Manchester derby to follow on Sunday. Villa's fight for survival takes them to Leicester City a week on Monday.