Moise Kean, who had a goal disallowed in the first half, didn't protest against the decision as he walked straight off the field and down the tunnel 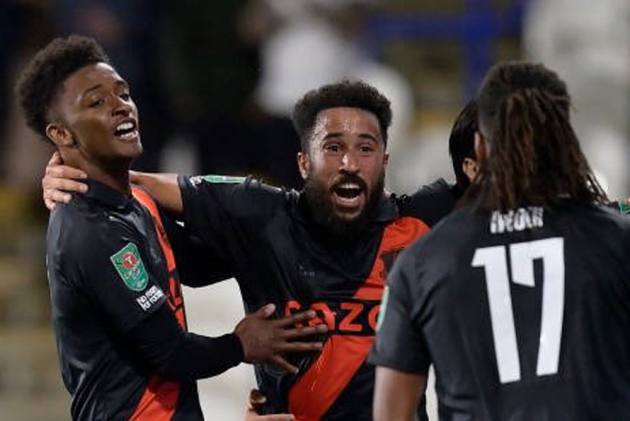 The Italy striker made his first start of the season in an English League Cup second-round match at second-tier Huddersfield on Tuesday and was sent off after getting involved in a scuffle in the middle of the field in the 59th minute.

Kean, who had a goal disallowed in the first half, didn't protest against the decision as he walked straight off the field and down the tunnel.

Everton defied the loss of Kean by scoring a 79th-minute winner through Andros Townsend for a 2-1 victory to advance along with six other Premier League teams that played lower-league opposition. Indeed, the only top-flight team to get eliminated was Crystal Palace, which lost 1-0 at fellow Premier League squad Watford.

Kean joined Everton from Juventus in the offseason of 2019 but scored just two goals in his first season, which mostly featured appearances as a substitute. He even achieved the ignominious feat of being substituted 19 minutes after coming on as a substitute against Manchester United.

He spent the majority of last season on loan at Paris Saint-Germain and fared much better, scoring 16 times in all competitions and even playing in the Champions League semifinals. He also stayed on the radar of the Italy squad, narrowly missing out on making the squad for the European Championship that the Azzurri won last month.

The 21-year-old Kean has returned to Everton for this season, but his red card will hardly have endeared him to the team's recently appointed manager Rafa Benitez and also means he'll have to serve a suspension.

The hiring of Benitez was controversial, given his past links to Merseyside rival Liverpool, but he has made an encouraging start to his tenure, having already picked up four points from a possible six in the Premier League.

United States striker Josh Sargent scored his first goals for Norwich since joining from German club Werder Bremen, with his double helping his new team to a 6-0 win over second-tier Bournemouth.

Aston Villa won by the same score at fourth-tier Barrow, with 19-year-old striker Cameron Archer marking his first start for the club with a hat trick.

Patrick Vieira is still without a victory as Crystal Palace manager after his team conceded an 86th-minute goal to lose at Watford. Ashley Fletcher netted the winner on his debut.

Vieira replaced Roy Hodgson in the offseason for his first senior managerial role in English soccer but Palace has opened the Premier League with a 3-0 loss at Chelsea and a 0-0 draw with Brentford.

Tennis balls were thrown onto the field by Oldham fans during the fourth-tier team's match against Accrington Stanley, in protest against the club's ownership.
Play was briefly halted, with Oldham's players throwing the balls back into the stand behind one of the goals. They later won a penalty shootout after a 0-0 draw.

Oldham is in last place in League Two, the lowest of England's four professional divisions.