This was the first time Mohamed Salah has failed to score in 11 games for Liverpool. The draw against Brighton leaves Liverpool on second spot with 22 points. 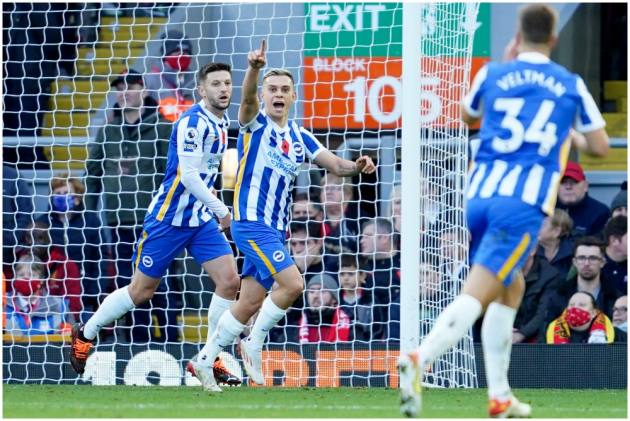 Brighton came the closest of any opponent in six months to ending Liverpool’s 24-match unbeaten run by recovering from two goals down to draw 2-2 in the Premier League at Anfield on Saturday. (More Football News)

Mohamed Salah failed to score for the first time in 11 games for Liverpool, but the hosts still looked like easing to victory when Jordan Henderson and Sadio Mane scored inside the first 24 minutes.

However, Enock Mwepu curled in a long-range shot for his first Premier League goal to reduce the deficit in the 41st and Leandro Trossard equalized in the 65th after collecting a pass from Adam Lallana, a former Liverpool player.

Brighton had the better chances to win the game from that point and Trossard had a late goal disallowed in front of The Kop.

Part of Brighton’s success lay in becoming only the second team this season, after Burnley in August, to stop Salah finding the net. His scoring streak was brought to a halt with his only chance seeing an effort ruled out for offside in the second half.

Liverpool was looking to follow up last weekend’s 5-0 thrashing of Manchester United but was never comfortable against Brighton, for whom Yves Bissouma had a shot tipped onto the post by Alisson Becker at 1-0.

Henderson’s goal came when Virgil Van Dijk’s pass out to the right isolated Salah against Marc Cucurella. The Egypt international weaved one way and then the other, before cutting the ball back for Henderson to plant a sidefooted finish past Robert Sanchez.

With Roberto Firmino dropping deep to link play with quick layoffs and one-twos, Jürgen Klopp’s side produced some incisive passing moves. Firmino was guilty of unnecessary over-complication when he tried to lob Sanchez after Mane and Naby Keita had combined, but there was nothing but an efficient simplicity about the second goal. 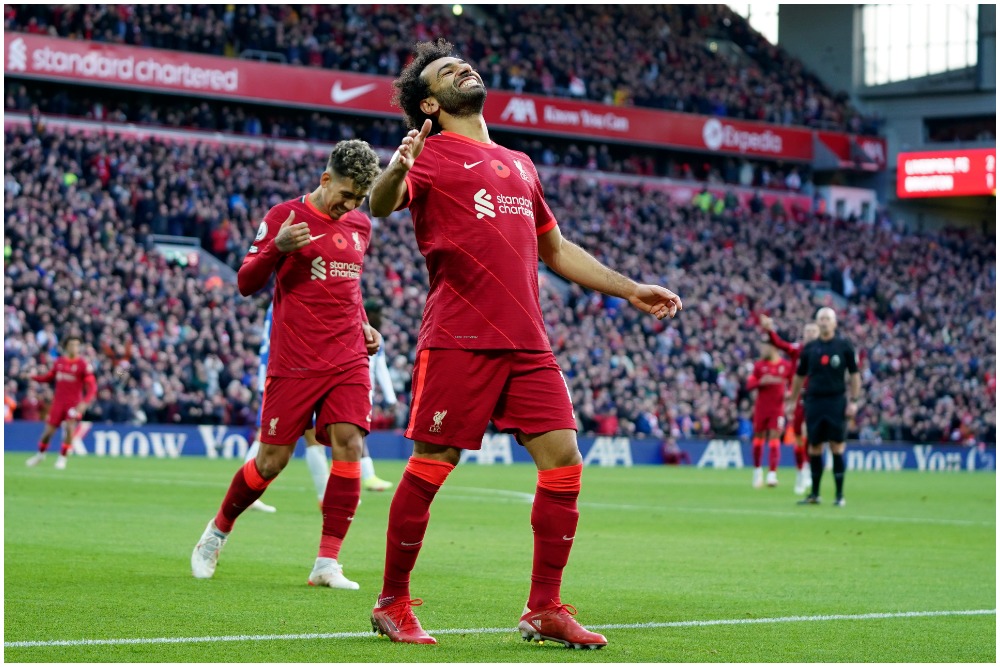 Keita, who had recovered quickly from being carried off at Old Trafford last Sunday, lasted 19 minutes but replacement Alex Oxlade-Chamberlain made an immediate impact.

Within five minutes of coming on, his inviting cross dipped at just the right angle to drop between Brighton’s two center-backs and Mane headed home his fourth goal in five league matches at Anfield.

A sprawling challenge from Lewis Dunk blocked Firmino’s shot while VAR denied Mane a second when the Brighton center back put his goalkeeper under pressure on the goalline. Sanchez’s clearance was blocked by the studs of Mane and bounced up onto the forward’s right arm before going in.

And it proved a double blow for Liverpool when Mwepu whipped a first-time shot from the 30 meters up and over Alisson and just under the crossbar.

Salah’s hopes of scoring in a club record-extending 11th successive match were dashed by an offside flag early in the second half but much of the fluency had gone from Liverpool’s game as Brighton pushed back, led by the indefatigable Lallana.

With Liverpool no longer in full control nor creating the chances it did before the break, Brighton sensed an opportunity and seized it.

The hosts were carved open down their left — resulting in Henderson and Oxlade-Chamberlain having a heated exchange about who was at fault — and Lallana teed up Trossard to cut inside and score in the 65th.

The momentum was all with Brighton and Trossard was denied what he thought was the winner by an offside flag.