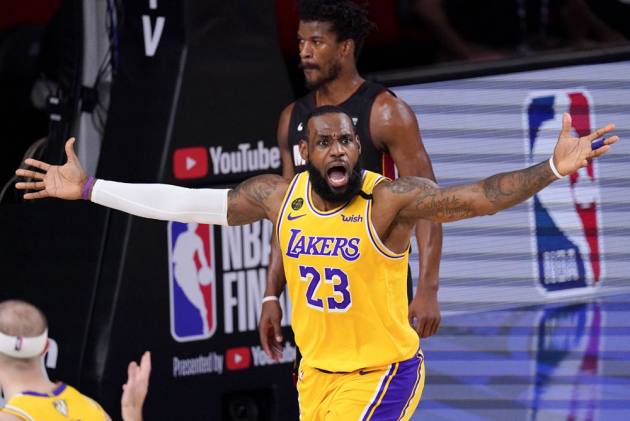 Christmas is a time for giving, and the NBA is no exception as fans feast on presents, turkeys and live basketball. (More Sports News)

This year marks the 73rd edition of the NBA on Christmas Day, having started playing games in 1947 – the league's second season.

LeBron James and the Los Angeles Lakers will be on show – the defending champions the headline act against Luka Doncic's Dallas Mavericks.

The Brooklyn Nets will be spearheaded by Christmas Day specialist Kevin Durant when they lock horns with the Boston Celtics, while Erik Spoelstra and the Miami Heat will be hoping for another Merry Christmas as they go head-to-head against Zion Williamson's New Orleans Pelicans.

Giannis Antetokounmpo – fresh off signing a mammoth supermax contract – will lead the Milwaukee Bucks against Stephen Curry and the Golden State Warriors, and Kawhi Leonard's Los Angeles Clippers will seek to avenge their stunning capitulation against the Denver Nuggets in the Western Conference semi-finals.

We look at the best stats and facts on Christmas Day in the NBA using Stats Perform data.

361 – James has the most career points on Christmas Day among active players, ahead of Durant (270), Russell Westbrook (241), James Harden (208) and Carmelo Anthony (186). All-time, James ranks third and he needs 17 points to surpass Oscar Robertson (377) for second place and 35 to leapfrog Kobe Bryant (395) for first place. The four-time NBA champion and MVP, who helped the Lakers snap their 10-year title drought in 2019-20, is also second for most career rebounds among active players on Christmas, behind former team-mate Dwight Howard (114) with 108.

97 – Lakers superstar James tops another category… assists. The 35-year-old is clear of Westbrook (82), Harden (58), ex-team-mate Rajon Rondo (55) and Curry (48) among active players. James is set to make his 14th appearance on Christmas Day. He has a 9-4 win-loss record while averaging 25.8 points, 7.7 rebounds and 6.9 assists per game. James is one win behind Dwyane Wade's record.

20 – Durant has scored at least 20 points in nine consecutive Christmas Day games, the second-longest streak in NBA history behind Robertson. The latter had 20-plus points in 10 straight games from 1960 to 1969. Durant has averaged 30.0 points in nine games on Christmas – an average only bettered by Anthony (31.0) among active players.

7-0 – Heat head coach Spoelstra is yet to lose in his seven Christmas Day contests. If last season's NBA Finals runners-up Miami win, Spoelstra will tie Phil Jackson for the longest Christmas Day streak by a head coach to start his career. The Heat have an NBA-best 10-2 record in games played on Christmas Day, while they have won seven successive games.

22 – The Lakers are playing on Christmas for the 22nd successive season, the second-longest streak in league history. The New York Knicks top the list following 38 straight appearances. The Lakers have the most all-time wins on Christmas Day with 23.

60 – Bernard King holds the record for most points scored on Christmas Day. King registered a 60-point haul for the New York Knicks against the New Jersey Jets in 1984.

23 – The Pelicans' JJ Redick shares the record for most three-pointers on Christmas Day, alongside Houston Rockets star Harden. James and Durant have both made 22 shots from beyond the arc.

7 – Nets guard Kyrie Irving holds the record for most steals in a Christmas Day game following his performance for the Cleveland Cavaliers against the Warriors in 2016.

1-5 – Of the current NBA franchises, the Nuggets have the second-worst record on Christmas Day, just ahead of the Toronto Raptors (0-2). Since 2010, the Nuggets are 0-3 – the worst run.