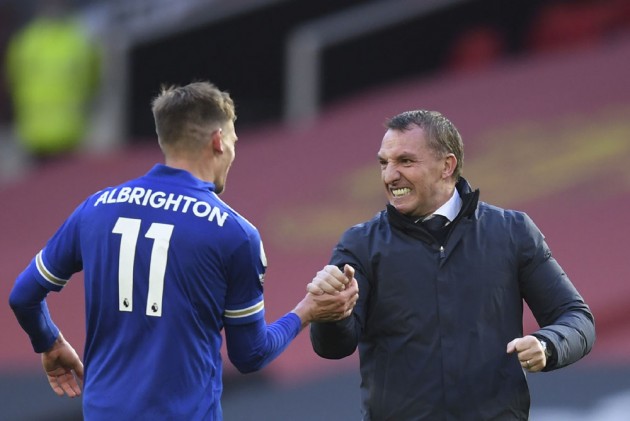 Goals from Luke Thomas and Caglar Soyuncu earned the Foxes three crucial points in the race for the top four.

Leicester moved back into to third with the victory, up to 66 points after 36 games, sitting ahead of fourth-placed Chelsea on 64 points from 35 games.

West Ham and Liverpool are on 58 and 57 points from 35 and 34 games respectively, with Leicester's win creating an improbable deficit to overcome.

"We’re at 66 points now, which is what two of the sides that finished in there last season got.

"It’s a big step but there are still two games to go and the teams are still chasing us, so we still have work to do."

Leicester, who play Chelsea in the FA Cup final this weekend, have two tough remaining Premier League fixtures away to the Blues and at home to Tottenham.

"It’s the stage of the season where every win, every point is so important," Rodgers said.

"To be able to come to Old Trafford, it’s another victory for us against a top six club and, as you can see, it’ll be very, very important for us and where we finish this season."

On Saturday's FA Cup final, Rodgers added: "You can see the quality of their team, but we’ll be ready. We’ll look forward to it and we’ll fight to be the first team in Leicester City’s history to win the FA Cup."