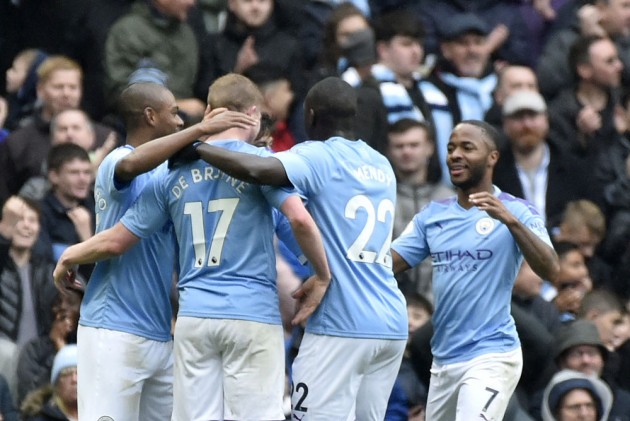 After upwards of a year of speculation, Pep Guardiola has confirmed Leroy Sane will leave Manchester City. (More Football News)

The Germany winger is widely expected to join Bundesliga giants Bayern Munich after rejecting a new contract at the Etihad Stadium.

His existing terms expire in June 2021, although the likelihood is City will begin the 2020-21 campaign without Sane in their ranks.

A solution in the transfer market might not be easily found, considering the two-season Champions League ban City have appealed against at the Court of Arbitration for Sport and the expected wider economic ramifications of the coronavirus pandemic.

Here, we look at some of the players in Guardiola's squad who – for better or worse – might be impacted by Sane's departure.

If Sane had bought into Guardiola's demands of a wide forward and maximised his talent to the extent England star Sterling has, this is probably not a conversation we would be having. While the City boss increasingly appeared not to trust Sane's contribution during last season's treble run-in, Sterling was and remains absolutely integral to his plans.

However, being almost exclusively played on the left during Sane's injury absence this season has seemed to take a toll upon the 25-year-old, whose preference for cutting in on his right foot had started to become predictable and easier to defend. Sane's presence allowed him to switch flanks and ask varied questions of defences. If his departure means Sterling being restricted to left-wing duties, City might struggle to fully realise the ample talents of their most potent attacking threat.

Back with a BANG  pic.twitter.com/1tAx5Ppt2m

Life as understudy to the club's all-time record goalscorer Sergio Aguero appears to weigh heavily upon Jesus at times, while playing an entire World Cup as Brazil's number nine without scoring – as he did at Russia 2018 – knocked his confidence considerably.

The 23-year-old rehabilitated his standing with the Selecao in a wide-right role during last season's Copa America triumph, while he put in arguably his finest City performance on the left flank when he opened the scoring in February's 2-1 Champions League win at Real Madrid. A selfless performer, Aguero and Sterling would have few complaints were Jesus to fill that position on a more frequent basis.

Of the pending exits at Manchester City, David Silva's departure at the end of this season is viewed as the most significant for presumed heir Foden. However, Guardiola has deployed the England Under-21 playmaker on the left of a front three this season, most notably when he was thrust into the EFL Cup final against Aston Villa and turned in an irresistible man-of-the-match display.

Foden came off the bench against Arsenal to score for the 11th time in 63 senior appearances, once again showing a keen eye for goal. He averages 2.5 chances created per 90 minutes in the Premier League.

That one meant a lot! Amazing to be back!  pic.twitter.com/BCCF7UqjBX

When Sane leaves, City will badly lack for natural width down the left side. One man who provides that if fit and firing is left-back Mendy, although his travails following two bouts of knee surgery since moving to Manchester in 2017 mean that "if" is doing an awful lot of work.

Guardiola has always been reluctant to pair Mendy and Sane, seemingly because both men like to operate in similar zones of the pitch. Without the latter, Mendy would be free to rove and Jesus could thrive as a tucked-in forward inside him. The big question, however, is whether the force-of-nature attacking threat City signed from Monaco can ever truly return after what his body has been through.

City's record signing when he joined in 2018, Mahrez has not been able to hit the heights he did at Leicester, where his mercurial skills secured the PFA Player of the Year award amid the most unlikely Premier League title triumph in 2015-16.

More often than not at City, the Algeria star has looked a rung or two below Sterling and Sane in terms of elite quality. Mahrez's 30 Premier League starts have yielded 14 goals and 12 assists in sky blue at a comparable per-90-minute rate to Sane. Maybe without him he can truly thrive?

The latest jewel of City's academy set-up, Braaf has already amassed a considerable personal following thanks to some moments of individual skill for the age-group teams that quickly went viral.

City would surely be loath for Braaf, who is reportedly admired by numerous clubs across Europe, to become the next Jadon Sancho and depart for superstardom elsewhere at a knockdown price. Sane's departure might just give the Dutch youngster a way in.