Real Madrid secured a 2-0 victory over Levante on Sunday, with Vinicius Junior scoring in successive LaLiga games for the first time 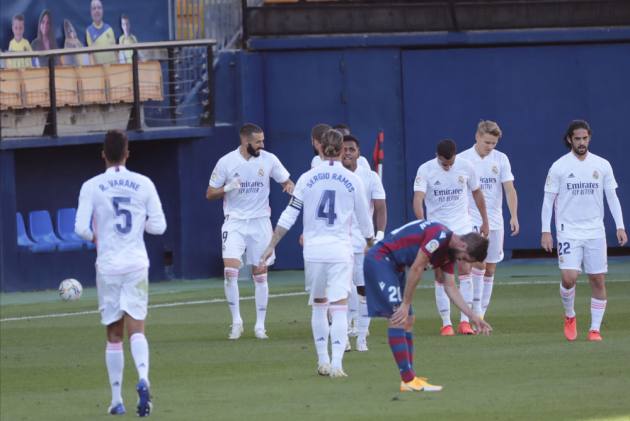 Vinicius Junior and Karim Benzema were on target as Real Madrid overcame Levante 2-0 in LaLiga on Sunday. (More Football News)

After netting the winner against Real Valladolid in midweek, Vinicius scored in successive LaLiga games for the first time in his career.

The Brazilian spurned a couple of chances at the Estadio de la Ceramica to add to his tally after Benzema struck the post early in the second half. Levante also had opportunities – Nikola Vukcevic hit the crossbar in the first half and Thibaut Courtois twice kept out Enis Bardhi around the hour mark.

But Levante's push for an equaliser was punished in the fifth minute of stoppage time when Rodrygo released Benzema and the striker got off the mark this season with an emphatic finish at the end of a fast break.

Madrid moved in front in the 16th minute when a corner fell to Vinicius at the back post and he made the most of not being closed down by bending a delightful effort into the far side of the net.

The champions struggled to create further openings and only the bar stopped Vukcevic restoring parity after he climbed above Nacho Fernandez – deployed at right-back with Dani Carvajal and Alvaro Odriozola out injured – to get his head on Jose Campana's corner.

Madrid showed greater urgency after the restart and, in the space of four minutes, Benzema struck the base of the post before Vinicius shaved the upright and missed the target from six yards out.

Levante were unperturbed and Bardhi saw a 25-yard thunderbolt parried by Courtois, who then kept out the midfielder's next effort, which took a deflection off Casemiro, with his leg.

Sergio Ramos had a goal ruled out for offside but Madrid put the game beyond doubt when Benzema showed great composure to polish off a swift counter-attack.

What does it mean? Zidane faith paying off

Despite seeing Gareth Bale, James Rodriguez, Borja Mayoral and Brahim Diaz leave, Zinedine Zidane has made little noise about a need for attacking options to be brought in during the transfer window. Vinicius appears to be flourishing with a greater chance for first-team minutes and could have had a hat-trick in his 69 minutes on the pitch, while he also provided one key pass.

Benzema up and running

After enjoying a sublime season in 2019-20, the new campaign did not got off to a great start for Benzema. He looked set to finish the game with a league-high 16 shots without scoring, but his 17th attempt on goal went in to avoid that ignominy.

Zidane had to call up Victor Chust to his squad for cover at right-back. He will hope to have Carvajal and Odriozola back as soon as possible after Nacho provided little going forward and almost cost his team a goal.

Madrid have a home game against newly promoted Cadiz to look forward to after the international break, while Levante travel to Athletic Bilbao.