Levante Vs Barcelona, Live Streaming: When And Where To Watch La Liga Match

It's now or never for Lionel Messi and his teammates with three matches remaining in La Liga title fight. Check match and telecast details for Barcelona's must-win game 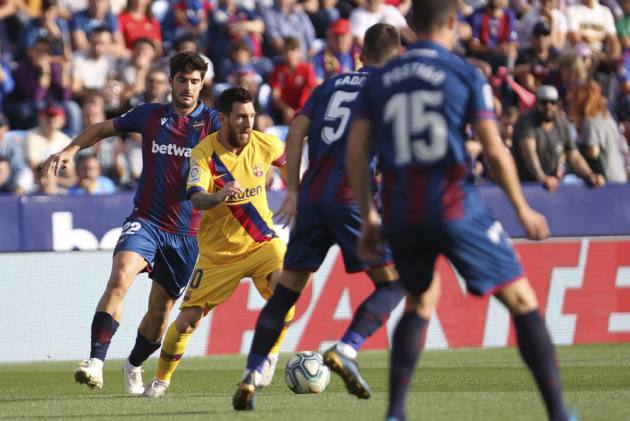 After playing out a dull, goalless draw with Atletico Madrid, Barcelona will have another opportunity to take La Liga lead when they visit mid-table Levante.  As things stand, Lionel Messi & Co remain two points off leaders Atletico following their stalemate and level on points with Real Madrid, who are one place better off due to their superior head-to-head record over their Clasico rivals. (More Football News)

A win at 14th-placed Levante on Wednesday will put Ronald Koeman's men at the top before Diego Simeone's Atletico host fifth-placed Real Sociedad on Thursday. Zinedine Zidane's Los Blancos visit 10th-placed Granada on Friday. These will be three nights of massive action as the Spanish league witness one of its tightest title fight.

Barca have collected just 10 of the last 18 points available, after picking up 45 from the previous 51. But Koeman has not lost any of his two matches against Levante as a manager, including a 1-0 win in this season's reverse fixture. Their overall league record at Levante is - 7 wins, 4 draws and 3 defeats.

However, Levante have won two of their last three meetings with Barcelona at the Ciutat de Valencia in La Liga, which is one more than they had in their previous 11 home games against them in the competition.

Paco Lopez famously helped Levante end FC Barcelona's unbeaten league run with a crazy 5–4 win at home in 2018. And he sure can repeat that feat against Culers.

With that check match and telecast details: